Geological Section from the Mississippi River to the Pacific Ocean 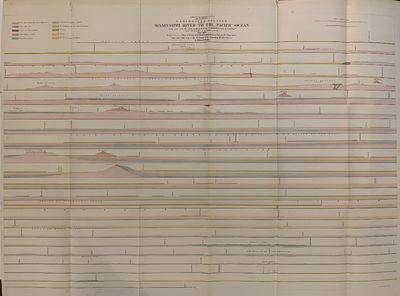 by BLAKE, William P.
U. S. Pacific Railroad Exploration & Survey, War Department. Map. Lithograph with original hand coloring. Image measures 26.75 x 38.5". This fascinating geological section of the Mississippi River derives from the investigations of Jules Marcou, a French geologist who worked extensively in North America. In 1853, under the service of the U.S. government, he became the first geologist to cross the United States as part of the Pacific railroad exploration, headed by A.W. Whipple, that was then then underway. This map was the result of his travels, and was published as part of a report entitled "Reports of explorations and surveys, to ascertain the most practicable and economical route for a railroad from the Mississippi River to the Pacific Ocean made under the direction of the Secretary of War, in 1853-4." Presented as a geological cross-section, the map is color-coded to indicate the type and age of the rock along the river as per a key in the upper left. Mountain ranges are simply but delicately rendered, and valleys are labeled beneath each section to show their expanse. The map also provides the locations of various creeks, forts, Indian territories, and intersecting rivers. The map is in good condition with original folds as issued. Some tears at folds. William P. Blake was the Geologist of the Office of the Unites States Pacific Railroad Surveys. These surveys were conducted in 1853-1855 in the interest of finding possible routes for a transcontinential railroad. This map functions as a document of the kinds of investigations conducted in this period of rapid Western expansion. (Inventory #: 250690)
$500.00 add to cart or Buy Direct from
Argosy Book Store
Share this item