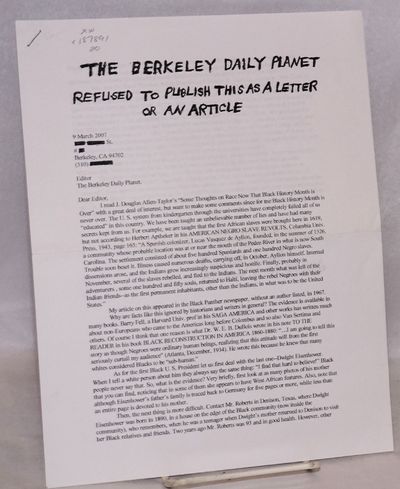 by Sanders, Tom
Berkeley: Self-published by the author, 2007. 2p, stapled, photocopied, signed by author, author redacted his street address and phone number, PO box given at signature. Author cites the contention of Lonnie F. Roberts, a Dennison, TX resident and African American, that Dennison-born Dwight D. Eisenhower was an African American passing as white. Sanders claimed that his article on this revelation appeared in a 1967 issue of the Black Panther but was clearly spurned by the Daily Planet. Appears to be a handout. (Inventory #: 187891)
$20.00 add to cart or Buy Direct from Bolerium Books
Share this item