Album of Original Watercolored Drawings of Birds, Mammals and Insects Drawn from the Museum at Manchester, England 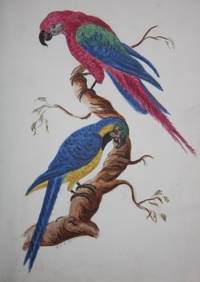 Full Blindstamped Morocco
by Atkinson, F.
Full Blindstamped Morocco. Very Good. N.d., circa 1870s, based on style of album (which is that of an earlier decade) and when the collection would have been accessible. 8vo. 24 by 19 cm. 48 pages of watercolors, plus three pages of a table listing the species represented and their locations. Blank leaves are scattered throughout the album, as the norm with an artist's album; the album still reads as filled up. Depicted are 55 species, mostly one per painting but a few paintings with two or three. The artistic style, and perhaps also proficiency, is not entirely consistent. Some of the paintings are decidedly naive, while others are quite polished, and a goodly number can be characterized as a combination. The mammals tend to be shown in a natural setting -- it would seem that Atkinson was probably painting what was in a diorama -- while at the other extreme are the insects, which are shown unadorned by anything but their own bodies, and here he was probably working of a specimen kept under glass. Regardless of the artist's choices and/or limitations, there is an unstinting fidelity to the subject matter, and not a single image is lacking in a winsome charm. Interspersed are a few non-zoological paintings such as one might find in a commonplace book -- a vase, a castle, a Buddhist temple or pavilion -- but these don't negate the essential thematic unity of the album. The museum that Atkinson relied upon for his inspiration was surely the Manchester Museum, which is part of the University of Manchester, and boasts a substantial collection of natural history. Most of the drawings are done directly onto the album's leaves, with just a few on mounted sheets. The artist signed many of the paintings either "F. Atkinson" or "FA". Beyond his identity, nothing has been discovered about who he was. Moderate to heavy wear to the binding. Hinge repaired. (Inventory #: 003326)
$1,800.00 add to cart Available from
White Fox Rare Books & Antiques
Share this item
White Fox Rare Books and Antiques
Offered by