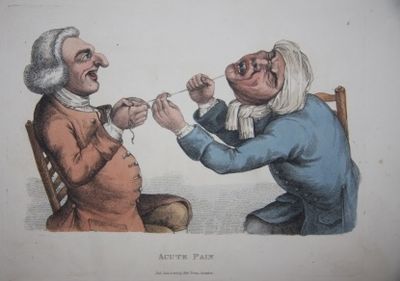 by Bobbin, Timothy [John Collier]. Edward Orme, engraver
London: Edward Orme. J. Hayes, printer, 1810. Half Calf. Very Good. 4to. 28 by 21 cm. 26 hand-colored plates in all (including dedication page plate, which does read as a full plate), plus frontis copper engraved portrait, uncolored, of Bobbin. Following a one page intro (address), the format is a plate is faced with an explanatory verse, usually short but in two instances, continuing onto a second page. Scarce with contemporary hand-coloring. Bobbin, whose real name was John Collier (1708-1786), was the Lancashire Hogarth, and was both celebrated in his day for his illustrations and his writings, which in the case of this work, was rendered in light verse. His publication on the Lancashire dialect was indeed the first important work to treat the subject and thus his legacy is both as a humorist and a linguistic scholar. The illustrations evoke the saucy genre paintings of earlier Dutch artwork as well as Hogarth and closer contemporaries such as George Moutard Woodward. They are exceptional, though, in their economy of composition, with little expended on extraneous background and details, and in this they stand apart from Woodward, not to mention Rowlandson and other illustrators of the period. Topically, the illustrations and verse have a broadness of theme that while of its period, also handily transcend it. Thus topics include love, anger, mercenary marriage unions, the squandering of savings in the pursuit of a Pyrrhic court victory. Dentistry, or the torture of tooth pulling, is the subject of a number of the plates, as is intemperate drinking. The characters depicted are rogues, simpletons, rakes, picaresque types, vulgarians, the panoply of everyday English society, brimming with life, if not always virtue. Rebacked in matching calf. Old calf abraded and chipped. Scattered soiling. (Inventory #: 003294)
$4,500.00 add to cart Available from
White Fox Rare Books & Antiques
Share this item
White Fox Rare Books and Antiques
Offered by