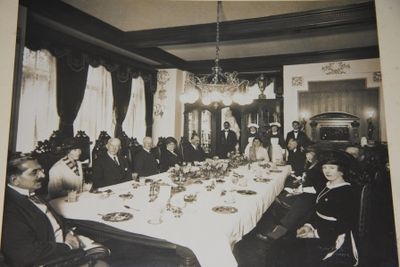 Windsor, UK, 1920. Half Morocco. Very Good. A group of oversized photos that capture a somber yet celebratory occasion at a grand estate two years after the end of the First World War. Oblong, 27.5 by 38 cm. Twelve large original photographs of a grand country estate called "The Willows", taken when its owner was being honored for having turned it over to the British war effort. As depicted on Downton Abbey, many a palatial home served as a temporary hospital, a hospice, or some other use relating to the war effort. In this instance, the property owner was a man of Indian origin, Sir Dhunjobhoy Bomanji, who had made a fortune in textiles and shipping. From India's Parsee community. Bomanji was an ardent supporter of the British Empire -- He would soon afterward, in 1923, donate a statue of the World War One commander, Douglas Haig (the first Earl Haig), to the City of Edinburgh. Haig in fact is one of the guests at the luncheon party and among the distinguished guests shown in one of the photos. Other distinguished guests included Princess Alice, the Earl of Athlone, Lady Mary Chrichton, Lady Campbell, General Carteret-Carey and Captain Donald Simson. The other photos are of the house decked out with banners and bunting for the entertainment of 700 guests comprised of ex-servicemen, war widows and orphans, the band of the Life Guards, two photos of the dining room set up for but prior to the luncheon, the procession of 300 war orphans by the host and luncheon guests, among them a Hasidic child, the procession of disabled soldiers, the procession of non-crippled ex-servicement, Mr. Bomanji presenting a check of 5,000 pounds to Princess Alice, Earl Haig addressing the diabled soldiers and finally, a group photo of the host and his most distinguished guests -- those at the luncheon. Leather worn along joints in a few spots. Gilt lettering partly rubbed on front board. (Inventory #: 003323)
$1,500.00 add to cart Available from
White Fox Rare Books & Antiques
Share this item
White Fox Rare Books and Antiques
Offered by