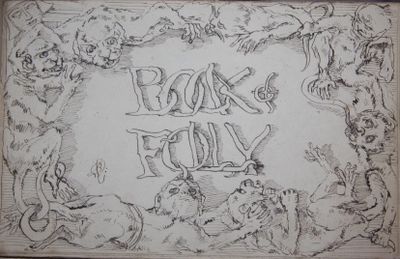 England. Full Morocco. Good. Oblong, 15 by 23 cm. Unpaginated, with 42 pages containing ink illustrations and/or verse, most of which are outlandish and nonsense often in the spirit of Edward Lear. The album had a few contributors, each of whom initialed his contribution. One poem is signed William Colquhoun. Otherwise, the contributions are initialed and their precise identities are unknown. It is probable that a number of the limericks and/or ink illustrations were done by children of the Walter Long, created the First Viscount Long, and their friends. The book carries the bookplate of Long on its FEP, and many of the items are initialed with an L. Long, known as a Irish Unionist, was a leading politician during World War One and the period directly prior and after, serving as First Lord of the Admiralty from 1919 to 1921. The level of artistic proficiency is various, the very best of the artwork has the unforced fluency of a cartoon by a Rococo master, when it is elaborate, or sure-handed and crisp, when a more minimalist sketchy line drawing. And at the lower end, even the most unskilled illustrations do not fail to amuse. (Nowadays, when no longer is artistic self-expression widely cultivated, it is inconceivable that such an album could be created.) The verse has a similar range but also should never fail to bring at least a smile of appreciation. Subject-wise, there is a generous dose of mayhem, cruelty, slapstick, and freakish traits and perverse tics -- after all, limericks predominate! There is one narrative set of five limericks about a dog who drank tea; otherwise, the works are all free-standing. There are burlesques of cats, horses, bald ladies, the fat, the skinny -- but telling you that this poem is about the "Soldier from Naples" or that one, "the old man on the moon", really doesn't relate much about their humor and warpness. Most of the entries are directly into the album, with a handful of illustrations pasted instead. Surface chips, scuffs and heavy wear to the red morocco, with repairs to the spine extremities. Toning and some light soiling to the leaves. One closed tear repaired. (Inventory #: 003335)
$1,500.00 add to cart Available from
White Fox Rare Books & Antiques
Share this item
White Fox Rare Books and Antiques
Offered by

[Extra-Illustrated] Views in Sussex, Consisting of The Most Interesting Landscape and Marine Scenery in the Rape of Hastings, From Drawings by J. M. W. Turner, R.A. Illustrated by Historical Descriptions. The Plates Engraved by W. B. Cooke, and Published Under the Auspices of John Fuller, Esq. of Rose Hill. The Scientific and Explanatory Notices of the Drawings by R. R. Reinagle, A.R.A.

London : John Murray and W. B. Cooke , 1819
(click for more details about [Extra-Illustrated] Views in Sussex, Consisting of The Most Interesting Landscape and Marine Scenery in the Rape of Hastings, From Drawings by J. M. W. Turner, R.A. Illustrated by Historical Descriptions. The Plates Engraved by W. B. Cooke, and Published Under the Auspices of John Fuller, Esq. of Rose Hill. The Scientific and Explanatory Notices of the Drawings by R. R. Reinagle, A.R.A.)