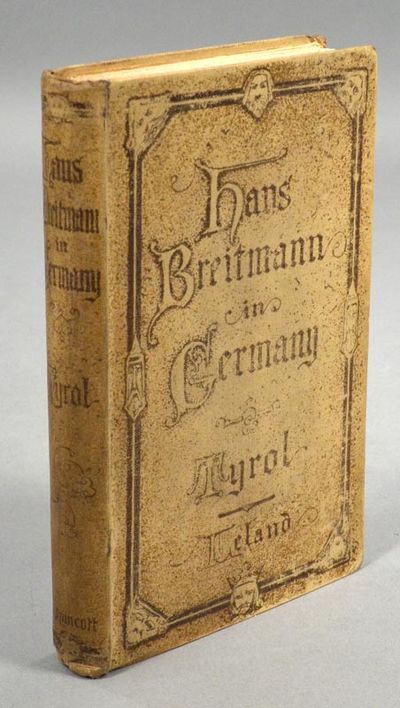 by LELAND, Charles G.
1895. LELAND, Charles G. HANS BREITMANN IN GERMANY, TYROL. London: T. Fisher Unwin, [n.d., 1895]. First edition intended for distribution in the United States, with Lippincott's imprint at the foot of the spine (BAL 11673). Frontispiece. Title-page printed in red and black. [i-iv], [1]-168. Small octavo, 6.75 by 4.25 in., publisher's tan cloth with printed title and decoration. Contemporary ink ownership. Slight shelfwear to binding, else a clean and sound copy in very good condition. Leleand's comic creation, Hans Breitmann, is "a robust, beer-guzzling, giant of a man" who speaks heavily German-accented English, whose life is full of adventure and is one big "barty" (that is, party). From his initial appearance in Graham's Magazine in May 1857, appreciation and demand for Hans Breitmann poems and stories grew until they were collected in pamphlets and carried forward in a series of books that enjoyed enormous popular and critical success throughout the last half of the nineteenth century in the United State and England, and even Germany. Admirers included James Russell Lowell, William Dean Howell, and Leslie Stephens. From 1870 until his death in 1903 Leland was an expatriate, living first in London and later in Italy, which probably accounts for the London imprint of this book in a binding intended for American distribution. (ANB Online). (Inventory #: 88478)
$100.00 add to cart Available from
Boston Book Company
Share this item