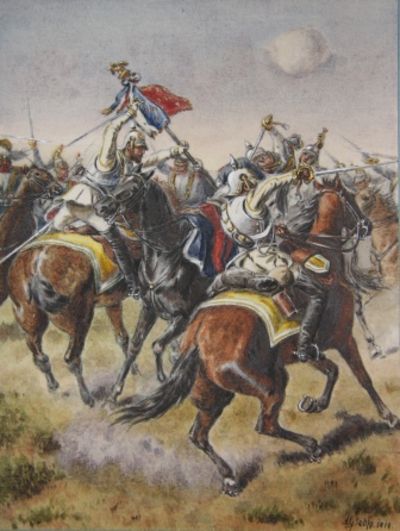 by Guentter, A.
1919-1921. Half Morocco. . Fine. Manuscript containing 84 original mounted watercolors depicting the Franco-Prussian War. 4to. 29 by 24 cm. 16 leaves with text and painted flags of all the German regiments in the war, followed by the 84 watercolors, each with a title written onto a separate sheet preceding it. At the end, a four page table of contents. While the illustrations are in a sense celebrating the German army and its individual regiments, the paintings are also undeniably beautiful, and in their impressive detail, come off as highly realistic and honest. The artist, about whom nothing is known beyond this body of work, showed meticulous care in rendering uniforms and weaponry, and he was also clearly an accomplished equestrian artist, capturing the horse in its power, motion, attitudes and terror. One would have to think that the author must have had an intent to publish this collection, but there is no evidence that this ever occurred, or that this was indeed an actual aspiration. What one has here, then, is a collection that is as good, and arguably superior, to the several artist's collections that were in fact published in the aftermath of the war. (Inventory #: 003345)
$10,000.00 add to cart Available from
White Fox Rare Books & Antiques
Share this item
White Fox Rare Books and Antiques
Offered by