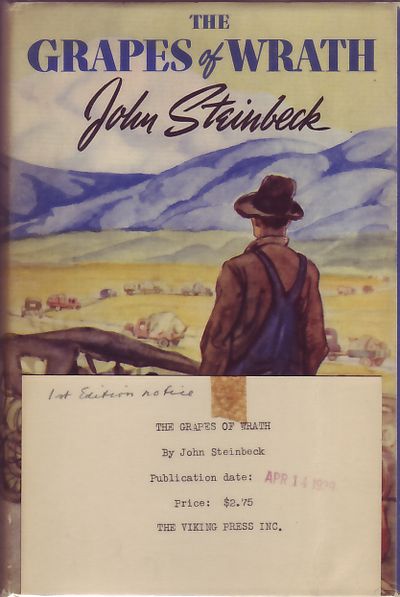 No book is more identified with John Steinbeck than this masterpiece which won the Pulitzer Prize for fiction and which was the source for the film version directed by John Ford that starred Henry Fonda as Tom Joad and which won Jane Darwell an Academy Award for her portrayal of Ma Joad, the book was also the source for the Tony Award-winning Broadway play, one of the true high spots of 20th Century literature, jacket designed by Elmer Hader, this is an incredibly scarce Review Copy with review slip from Viking, this is the only review copy seen by this bookseller in more than 50+ years of being involved in all things Steinbeck, see Goldstone & Payne A12a, see Morrow 107. Fine in a jacket with a couple of small tape ghosts from where the review slip was previously affixed, jacket is otherwise clean, bright, and fine. (Inventory #: JD29949)
$15,000.00 add to cart Available from
James M. Dourgarian, Bookman
Share this item