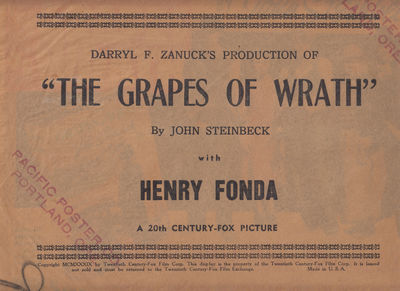 A complete set of 11X14-inch color lobby card posters for the original release of this classic story and classic film which was directed by the famed John Ford and which starred Henra Fonda as Tom Joad, Jane Darwell as Ma Joad, and John Carradine as Casy, the set also includes its original printed housing envelope which is probably even more scarce than the posters, the fragile housing envelope is plain brown and is printed with the film title, Steinbeck's name, Fonda's name, etc. none of these posters were in the Adrian H. Goldstone collection, but see Goldstone & Payne E6, not recorded by Morrow, extremely scarce, especially as a complete set and with the housing envelope. While there are pin holes in some corners from theatre mounting, as usual, these posters are uniformly clean, bright, and fine. (Inventory #: JD28137)
$8,500.00 add to cart Available from
James M. Dourgarian, Bookman
Share this item