American Pied-bill Dobchick. From "The Birds of America" (Amsterdam Edition) 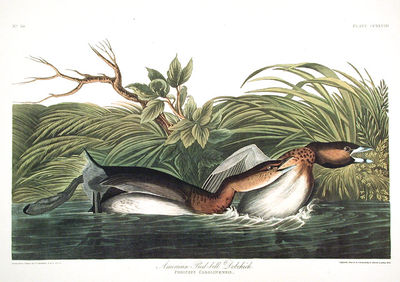 by AUDUBON, John James (1785-1851)
Amsterdam and New York: Johnson Reprint Corporation and Theatrum Orbis Terrarum, 1971. Colour-printed lithograph, on fine hand-made paper. Excellent condition. Image size: 14 x 21 inches. Sheet size: 26 3/4 x 39 7/8 inches (approx). [Pl. 248]. In October 1971, employing the most faithful printing method available, the best materials and the ablest craftsmen of their age, the Amsterdam firm of Theatrum Orbis Terrarum Ltd., in conjunction with the Johnson Reprint Corporation of New York, set out to produce the finest possible limited edition facsimile of the greatest bird book ever printed: the Havell edition of John James Audubon's well-loved "Birds of America". The Curators of the Teyler's Museum in Haarlem, Holland made their copy of the original work available for use as a model. The Museum, founded in 1778, bought their copy through Audubon's son as part of the original subscription in 1839. After long deliberation, the extremely complex but highly accurate process of colour photo-lithography was chosen as the appropriate printing method. The best exponents of this art were the renowned Dutch printing firm of NV Fotolitho Inrichting Drommel at Zandvoort who were willing to undertake the task of printing each plate in up to eight different colours. The original Havell edition was published on hand-made rag paper and the publishers were determined that the paper of their edition should match the original. Unhappy with the commercially available papers, they turned to the traditional paper manufacturers G. Schut & Zonen (founded in 1625), who, using 100% unbleached cotton rags, were able to produce a wove paper of the highest quality, with each sheet bearing a watermark unique to the edition: G. Schut & Zonen [JR monogram] Audubon [OT monogram]. The publishers and their dedicated team completed their task late in 1972 and the results of these labours were affectionately known as the "Amsterdam Audubon." 250 copies were published and sold by subscription, with the plates available bound or unbound. Given all this careful preparation, it is not surprising that the prints have the look and feel of the original Havell edition. John James Audubon was born in Les Cayes, Haiti on 26 April 1785. From 1788 to 1803 he lived in France until he was sent to the United States to manage an estate that his father had bought in Pennsylvania. He returned to France in 1805, but his fascination with the United States had taken root and he returned again in May 1806. He married Lucy Bakewell in 1808 and together they embarked on a difficult period financially that was only to be resolved, through Audubon's unshakable and justified belief in his own abilities, with the publication of his masterpiece in 1827-1838. "The Birds of America" is the single greatest ornithological work ever produced and is the realization of Audubon's dream of traveling throughout the United States recording, natural size, every native bird then known. The 435 double-elephant folio sized plates, printed by the Havells of London, depict some 1,065 different species, the majority drawn from specimens that Audubon himself had captured. The Havell edition was expensive at the time of publication and this has not changed. Possibly the last complete copy which will ever appear on the market sold for a staggering $8,802,500 in a sale in New York in March 2000. Currently, the increasingly rare individual plates from this edition, when they do appear, generally sell for between $5,000 and $175,000 depending on the image. The quality of the Amsterdam Audubon plates is apparent to any discerning collector and it is becoming ever clearer that they offer the most attractive alternative to the Havell edition plates, given the latter's spiraling prices. Cf. Zimmer, p. 22; cf. Bennett, p. 5; cf. Fries, Appendix A; cf. Wood, p. 208; cf. Nissen IVB 51; cf. Sabin 2364; cf. Ripley 13; cf. Tyler, Audubon's Great National Work, 1993, Appendix I. (Inventory #: 7625)
$150.00 add to cart or Buy Direct from
Donald A. Heald Rare Books
Share this item
Donald A. Heald Rare Books
Offered by

A Monograph of the British Nudibranchiate Mollusca

London : Ray Society , 1910
(click for more details about A Monograph of the British Nudibranchiate Mollusca)

A Narrative of Voyages and Travels, in the Northern and Southern Hemispheres: comprising three voyages round the world..

Boston : by E.G. House for the author , 1817
(click for more details about A Narrative of Voyages and Travels, in the Northern and Southern Hemispheres: comprising three voyages round the world..)
View all from this seller>