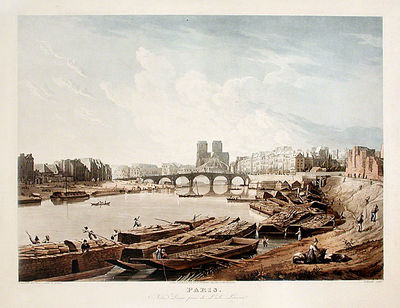 by PUGIN, Augustus Charles (1762-1832)
London: R.Ackermann, 1821. Hand-coloured aquatint engraving by Havell from J.Gendall's drawing after Pugin. Printed on wove paper. In excellent condition with the exception of a expertly mended tear on the bottom margin. Image size: 13 7/8 x 18 7/8 inches. A highly dynamic view, emphasizing the cathedral of Notre Dame's position at the heart of the city of Paris Notre Dame, before the addition of Violett le Duc's central spire, is shown dominating the skyline in this view taken from the south side of the Ile de St. Louis, looking north west upriver to the Pont la Tournelle with the Cathedral beyond. The foreground includes a number of barges loaded with timber, probably for furl, bargees wrestle with the newly arrived vessels, positioning them using long poles, unloading of the moored barges is already underway, with workmen trudging up well-worn paths in the river bank. Much activity can be seen on the wide `beach' of the far left bank. Pugin (1762-1832) `architect, archæologist, and architectural artist, was born in France, and claimed descent from a distinguished French family. Driven from his country either by the horrors of the revolution or by private reasons connected with a duel, he came to London about 1798, and soon found employment as a draughtsman in the office of John Nash.... To increase his powers as an artist, he entered the schools of the Royal Academy... He further revived acquaintance with Merigot, an aquatint engraver, who formerly had been a drawing-master to his father's family, and studied under him with advantage. Nash, who treated his pupils and assistants with great kindness and hospitality, discovered in Pugin a valuable subordinate... The truthfulness of Pugin's drawings in form and colour at once attracted attention. A change was then coming over water-colour art. The old style of brown or Indian ink outline with a low-toned wash was giving way to the more modern practice of representation in full colour, and Pugin, though he limited his palette to indigo, light red, and yellow ochre, was an active supporter of the new movement, and to his influence its ultimate predominance was largely due. In 1808 Pugin was elected an associate of the Old Water-colour Society, which had been founded in 1805, and he was a frequent exhibitor at the annual exhibitions held first in Lower Brook Street and subsequently in Pall Mall... About the same time Pugin was employed on Ackermann's publications, notably the 'Microcosm,' for which he supplied the architectural portions of the illustrations, Rowlandson executing the figures. ....Meanwhile Nash and his works were not altogether neglected. Pugin in 1824 was asked to make the drawings for a volume illustrating the Brighton Pavilion, and while he was engaged upon the work George IV, who came to watch, accidentally upset the colour-box, and, mindful perhaps of illustrious parallels in the past, picked it up with an apology that greatly gratified the artist.` (DNB). The present separately issued plate led to a latter publication `Views of Paris and Environs,' (London: 1828-1831), with plates of similar subjects but published in a much smaller quarto format. (Inventory #: 2682)
$2000.00 add to cart or Buy Direct from
Donald A. Heald Rare Books
Share this item
Donald A. Heald Rare Books
Offered by