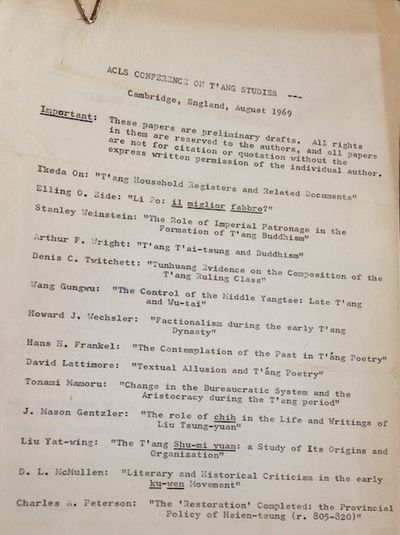 Cambridge, England: [American Council of Learned Societies]; the authors, 1969. Fourteen 8x13 inch packets of mimeographed or photo reproduced typescripts, representing the papers delivered at the conference by some of the most significant scholars in the field at the time. Packets are held together with large clips, some leaving minor rust marks; some pages crinkled or partly toned. Cover sheet lists all of the papers and their authors, noting that these were drafts not for citation without the author's permission. Based on the cover sheet, this is the complete assemblage. Authors include Arthur F. Wright, Denis Twitchett, Wang Gungwu, Hans Frankel, Liu Yat-wing, Ikeda On, Tonami Mamoru, Howard Wechsler, and others. Topics include Tang Buddhism, the Guwen movement, the study of household registers and other administrative documents, and literary issues. (Inventory #: 189154)
$75.00 add to cart or Buy Direct from Bolerium Books
Share this item