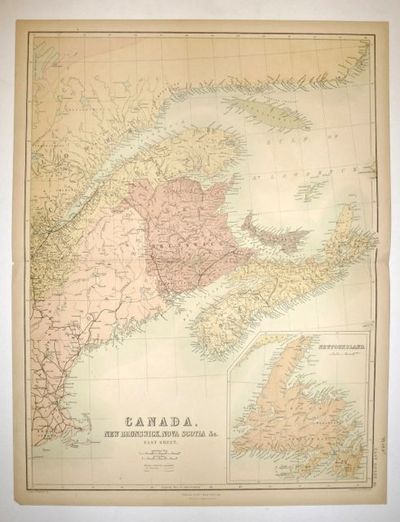 by BLACK, Adam and Charles
Edinburgh: A. & C. Black. unbound. very good(+). Bartholomew, J.. Map. Color lithograph. Image measures 16.5" x 22". Repair to center fold, left margin. Otherwise in very good condition. This detailed and lucid map of Canada is the east sheet of a larger grouping of maps by A.C. Black. It describes the area around the Gulf of St. Lawrence, including Newfoundland, Nova Scotia, Prince Edward Island, New Brunswick, and the Anticosti Islands. Published circa 1854, the map was made only a few years after Nova Scotia became the first colony in British North America and in the British Empire to achieve self-governance. Notable features include the demarcation of sand banks in the Atlantic Ocean. Red lines indicate railways, railways under construction, and canals as per a key above the title, pointing to the growing industry in this region. The map is in very good condition with some wear to the center seam. Otherwise very clean. Adam Black (1784-1874) was a Scottish publisher and politician who, with his brother Charles, founded the A & C Black publishing company. Together they published a wide range of materials, including atlases, medical books, and the 7th, 8th and 9th editions of the Encyclopedia Britannica. This map is a fine example of their work. (Inventory #: 252163)
$100.00 add to cart or Buy Direct from
Argosy Book Store
Share this item