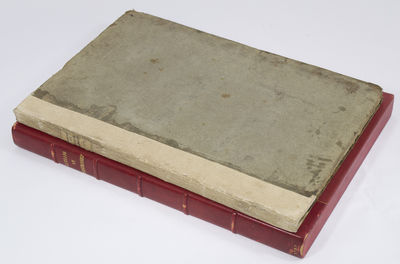 by BUNBURY, Henry William
First Edition, With Twelve Engraved Plates BUNBURY, Henry William. [GAMBADO, ESQ., Geoffrey]. An Academy for Grown Horsemen, Containing the Completest Instructions for Walking, Trotting, Cantering, Galloping, Stumbling, and Tumbling. Illustrated with Copper Plates, and Adorned with a Portrait of the Author. London: Printed for W. Dickinson, 1787. First Edition. With 12 stipple engraved plates including the frontispiece. vi,[3],vi-xx,38 pp. Collates the same as the copy in the ESTC. They mention "Imperfect; wanting B1 of the prelims? - possibly deliberately mis-signed in order to support the ímissingí portion of the authorís preface- see editor's note" Editor's note reads "The editor has to lament that the first pages of our Author's work, are amongst those missing, but as the Author himself, in his Preface, seems to have arranged his string of instructions, the Editor thinks himself justified in placing those first that relate to the choice of a horse." Original drab boards rebacked to style with the original paper label. Boards with wear and soiling. Inner hinges cracked but firm. Foxing, toning and soiling throughout. Chemised and housed in a quarter red morocco slipcase. Very good. Amateur artist and caricaturist Henry William Bunbury (1750-1811) ìdrew chiefly in pencil, or black and red chalk; but, although he seems to have used the needle, he was never successful as an etcher, and his designs were generally reproduced by engravers, mostly in stipple or dot...The three works by which he is best known belong...to 1787. They are ëA Long Minuet, as danced at Bathí (25 June); ëThe Propagation of a Lieí (29 Dec.); and the volume of equestrian misadventures called ëAn Academy for Grown Horsemen,í by ëGeoffrey Gambadoí...In 1791 appeared the ëAnnals of Horsemanship,í a kind of sequel to the ëAcademy for Grown Horsemaníî (D.N.B.). ESTC T18966. HBS 65498. $850 (Inventory #: 65498)
$850.00 add to cart Available from
Heritage Book Shop
Share this item

London : Printed for the author, and sold by Mr. Sandby , 1765
(click for more details about Narrative of the Proceedings Relative to the Discovery of the Longitude at Sea)
View all from this seller>