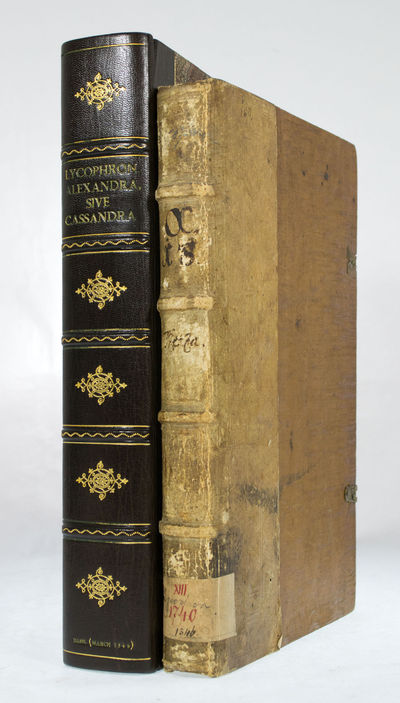 by LYCOPHRON
ìHappy is the scholar who possesses this treasure of learning!î LYCOPHRON. Alexandra, sive Cassandra: poema quidem obscurum etiam doctis appellatum, sed ita eruditissimis Isacii Tzetzis Grammatici commentariis...Adjectus quoque est Joannis TzetzÊ Variarum historiarum liber, versibus politicis ab eodem GrÊce conscriptus, & Pauli Lacisii Veronensis opera ad verbum LatinË conversus, nec unquam antea editus. Basel: [Ex officina Joannis Oporini, 1546]. First separate edition of Lycophronís Alexandra. Two parts in one folio volume (11 9/16 x 7 11/16 inches; 293 x 195 mm.). [16], 180; [8], 268, [1, colophon], [3, blank] pp. Title and text in Greek and Latin. Contemporary half blindstamped pigskin over wooden boards. With two clasps. Spine lettered in manuscript with four raised bands. From the library of Joseph von Lassberg. Two additional early ink inscriptions. Very minor worming in the lower margin of the last five leaves and to rear endpapers. Small marginal stain to Pp2 and Pp3. Housed in a custom quarter brown morocco clamshell, gilt-stamped. The only work of Greek poet Lycophron (b. ca. 320 B.C.) to survive. ìWhen a young man he went to Alexandria and became one of the Pleiad of tragic poets. The only work of his to survive is the Alexandra, a dramatic monologue in 1,474 lines of iambic trimeters...in which the slave set to watch Alexandra (i.e. Cassandra) reports her prophecies to her father Priam, king of Troy. They concern the destruction of Troy and the crime of Ajax, the return of the Greeks and their fate, Aeneasí arrival in Latium, the eventual struggles between Europe and Asia, and the rise of Roman power. These last passages, which concerned events of Lycophronís own lifetime, raised doubts even in antiquity as to whether he could really be the author. The whole poem is written in an extremely obscure and allusive styleî (The Concise Oxford Companion to Classical Literature). ìThe first separate edition (previously without the commentary of Tzetzes in Pindarus Aldi, 1513), superintended by Arn. Arlenius, who corrected the text...and added thereto the commentary of Tzetzes from a Bolognese MS.î (Ebert). ìThis is a very curious edition, and contains a hundred notable things which are not in the Oxford edition of Lycophron, by Potter. Happy is the scholar who possesses this treasure of learning!íî (quoting Dr. Harwood in Dibdin, Greek and Latin Classics). Adams L2102. Dibdin, Greek and Latin Classics, II, pp. 208-209. Ebert 12537. HBS 66514. $20,000 (Inventory #: 66514)
$20,000.00 add to cart Available from
Heritage Book Shop
Share this item