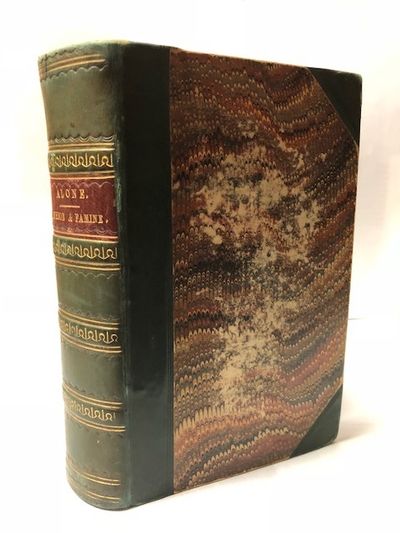 first edition [Together with:] Ann. S. Fashion and Famine; or, Contrasts in Society. London: Richard Bentley, 1854

by [Women's fiction]. [Harland, Marion, pseudonym of Mary Virginia Hawes Terhune]
London: Sampson Low, Son & Co., 1854 Early, perhaps first English editions of two very American popular women's novels. The first book was first published in Richmond in 1854 and the second in New York in 1854. . [Together with:] Ann. S. Fashion and Famine; or, Contrasts in Society. London: Richard Bentley, 1854. Small octavo. Small octavo. viii, 344 pp. Bound together in contemporary green calf over marbled boards, rubbed. Gilt spine with red morocco label, marbled edges. Contemporary armorial bookplate of Sarah Phillott. A very good copy. Mary Virginia Hawes Terhune (1830-1922) achieved great success with both her romantic novels and her books and columns of advice for homemakers. This, her first and most popular novel, was written when she was sixteen though not published until later. Her fiction generally deals with the South before the Civil War. It is generally "of a mild, pleasant type, often with a marked moral or religious tone" (DAB). Ann S. Stephens (1810-1886) has the distinction of having been the author of Dime Novel No. 1. Stephens was on the staff of Graham's Magazine when Poe was the editor, and was editor or on the staff of several other journals, including Peterson's and Stephens' Illustrated New Monthly. Her serialized melodramatic works appeared in these journals, and many were subsequently published as books. At the time of her death, a twenty-three volume set of her works was being prepared. (Inventory #: 13481)
$200.00 add to cart or Buy Direct from
Michael R. Thompson Rare Books
Share this item
Michael R. Thompson Rare Books
Offered by