Are There Quantum Jumps 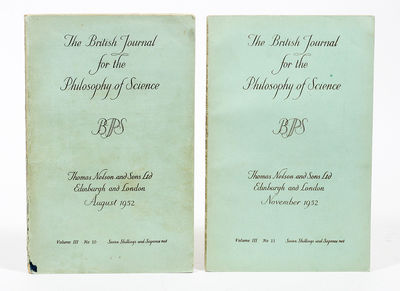 by SCHRÖDINGER, ERWIN
Edinburgh and London: Thomas Nelson and Sons. 1st Edition. Soft cover. Very Good. FIRST PRINTING IN ORIGINAL WRAPPERS of Schrödinger's consideration of quantum jumps and the future of physics. Complete in two parts. "Throughout his life, Schrödinger sought to discredit Bohr's concept of quantum jumping. His forceful attacks culminated in the 1952 paper 'Are There Quantum Jumps?' In this paper he also presented some objections against Born's collision treatment and probabilistic interpretation..." Schrödinger also "repeated his old arguments, enveloped in a good deal of rhetoric. Physical science is at present in danger, he argued, of being severed both from its glorious history and from its cultural milieu. Physicists must concern themselves, not only with ingenious theoretical constructs and their agreement with experimental data, but also with the suitability of their concepts to be absorbed into a general spiritual culture of mankind: 'Science is not a soliloquy. It gains value only within its cultural milieu, only by having contact with all those who are now, and who in future will be, engaged in promoting spiritual culture and knowledge.' "Not all concepts, according to Schrödinger, are destined to survive: 'A theoretical science... where the initiated continue musing to each other in terms that are, at best, understood by a small group of close fellow travelers, will necessarily be cut off from the rest of cultural mankind, in the long run it is bound to atrophy and ossify'. The 'abbreviated language' of quantum jumps, Schrödinger argued, is not a suitable candidate for long-term survival. There were other 'ingenious constructs of the human mind that gave an exceedingly accurate description of observed facts and have yet lost all interest except to historian,' for example, the epicycles of planetary motion. The modern analogue of epicycles, Schrödinger prophesied, are the quantum jumps" (Beller, Quantum Dialogue: The Making of a Revolution). IN: The British Journal for the Philosophy of Science, Vol III, No. 10 (pp. 109-123); Part II, Vol III, No. 11 (pp. 233-242). Edinburgh and London: Thomas Nelson and Sons, Ltd., August and November, 1952. Octavo, original wrappers. A few marginal (scientific) pencil notations (not in Schrödinger paper). Part I with a little chipping and small ink stain to spine end wrappers and patch of soiling to rear wrapper. Part II fine. An extremely well-preserved copy, rare in original wrappers. (Inventory #: 1398)
$1,450.00 add to cart or Buy Direct from
Manhattan Rare Book Company
Share this item