The Courtin'. Illustrated by Winslow Homer 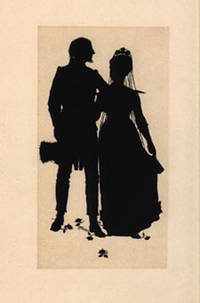 by Lowell, James Russell
Boston: James R. Osgood and Company, 1874. First Edition thus with seven heliotypes after drawings by Winslow Homer. Small 4to; 52pp, salmon-colored "watered" cloth stamped in gold gilt and black reproducing the Homer silhouette of a young girl sitting peeling apples in black on gold with the author, title, and illustrator in black, gilt stamping and lettering on spine, all edges gilt, spine a bit dimmed, a bit of soiling and wear around edges with one bump on bottom back edge, inner hinge loose at title page, contemporary inscription on front free endpaper, probably the best copy of this scarce book we've had. The book was also issued in a tougher green cloth and brown leather. The pale salmon color is the prettiest - and the hardest to find in acceptable condition. These seven silhouettes by Homer are in the tradition of a popular American folk art form that came into popularity in America in the late 19th century but was rarely used for book or magazine illustration. Rather they were used in place of portraits of individuals (in rare cases, entire families) for household decoration or keepsakes (in gutta-percha cases). Homer's genius was in taking this humble art form and translating it into illustrations for one of Lowell's most popular poems which had become an American icon. Homer's first illustration, Zeke peeking in the window, has become an icon itself, instantly recognizable as Homer's reputation has soared in second half of this century. BAL 13306. (Inventory #: 4591)
$750.00 add to cart or Buy Direct from
Priscilla Juvelis
Share this item