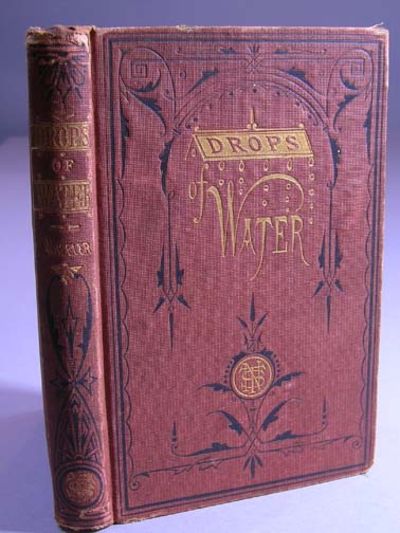 by Wheeler [Wilcox], Ella
New York: The National Temperance Society and Publication House, 1872. First Edition of the Author's First Book. 12mo; 132pp; + 8pp. ads for "Publications of the National Temperence Society"; brick-colored cloth, printed in gold gilt with black decorations, rubbed at all edges, especially corners and spine, soiling to most pages at margins, "Don't Drink" on page 7 with large erasure with loss of 4 or 5 words, good only. Ella Wheeler Wilcox (1850-1919), poet and journalist, wrote her first novel at age 9. By the age of 14, she had successfully submitted some prose sketches to the New York Mercury. She left school to devote her time to her writing, hoping to escape family poverty through her pen. She did attend the University of Wisconsin in 1867. In 1872, she published a collection of temperance poems which won a small audience. Fame, as well as notoriety came in 1883 when a Chicago firm refused to publish her POEMS OF PASSION (although much of the verse therein had previously appeared in journals). Another publisher picked up on the free publicity and publishedthe volume before the year was out. It sold 60,000 copies in the first two years, making Ella Wheeler's reputation. She married Robert Wilcox in 884, and moved to New York shortly thereafter. She produced a syndicated column of prose and poetry which had a large following. She was interested in spiritualism, trying desperately to contact her husband through the spirit world after his death. She reached a broad audience with her verse, penning the lines "Laugh, and the world laughs with you; / Weep, and you weep alone." NAW III, pp. 607-608. Author's First Book. (Inventory #: 7828)
$500.00 add to cart or Buy Direct from
Priscilla Juvelis
Share this item