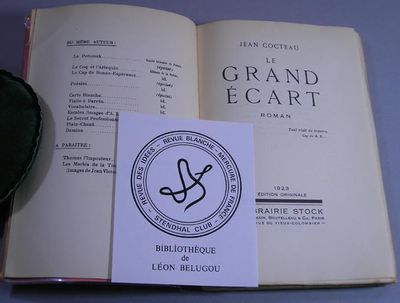 by Cocteau, Jean
Paris: Librairie Stock, 1923. First Edition, one of 550 copies on pur fil lafuma. 8vo; 203pp; + Acheve d'imprimer, + errata. Original salmon pink wrappers printed in black, spine and edges a bit sunned, edges of pages a bit age toned, but generally very good with the ex-libris of French man of letters and editor at "Mercure de France," Leon Belugou, laid in. Jean Cocteau (1889-1963), film maker, poet, novelist, publisher and artist, was part of most of the art movements that swept Paris in the first half of the 20th century. He was an intimate of Diaghilev and worked with Picasso on the famous Ballet Russe production "Parade." Credited with establishing the ground work for France's "New Wave" filmmakers, his "Beauty and the Beast" is considered one of the greatest films of all time. His friends and artistic partners are a "who's who" in the cultural world of Paris. (Inventory #: 9443)
$400.00 add to cart or Buy Direct from
Priscilla Juvelis
Share this item