Autograph Poem "While Shepherds watched their flocks by night." 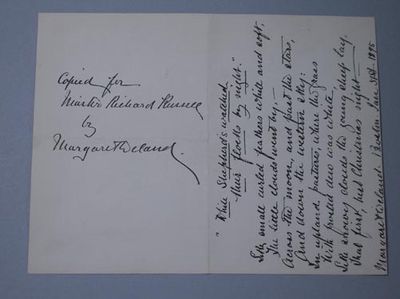 by Deland, Margaret W. C.
Boston, 1895. Holograph poem. Single sheet; 6 ¼ x 8"; eight lines of verse, evidence of folding in the center and faint remnants of adhesive on the back again neither affecting text, signed, very good. Written entirely in Margaret Deland's (1857-1945) hand, the introduction reads: "Copied for Master Richard Russell / by Margaret Deland" The verse itself is "While Shepherd's watched / Their flocks by night.' / Like small curled feathers white and soft, / The little clouds went by, - / Across the moon, and past the stars, /...Like snowy clouds the young sheep lay, / That first, best Christmas night -...Margaret Deland...". Margaret Deland's first book was a collection of poems, THE OLD GARDEN, AND OTHER VERSES, printed in 1886. She went on to become one of the best-known novelists and short story writers of her day, receiving four honorary doctorates and becoming the second woman (after Julia Ward Howe in 1907) elected to membership in the National Institute of Arts and Letters. This famous carol was written by the Englishman Nahum Tate (1652-1715) and first appeared in Tate and Brady's PSALTER of 1702. Tate's standard version begins "All seated on the ground, / The angel of the Lord came down...". Several writers, among them Margaret Deland, have tried their hands at other versions of the carol. NAW I, pp. 454-6. Timelines, pp. 312, 315. Women's Writing in the United States, p. 243. (Inventory #: 8551)
$150.00 add to cart or Buy Direct from
Priscilla Juvelis
Share this item