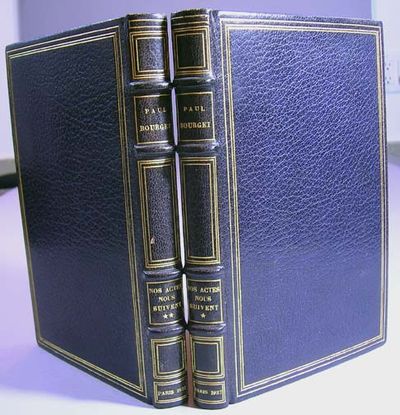 by Bourget, Paul
Paris: Librairie Plon, Les Petits-Fils de Plon et Nourrit, 1927. First edition, one of 15 on papier de Chine de tete copies, from a total issue of 400. Bound by H. BLANCHETIERE in full navy morocco, edges with gilt double fillets, panelled spines with gilt lettering, doublures with panels of pink moire surrounded by navy morocco with gilt fillets, guards also of pink moire, marbled inner leaves, a.e.g., slipcases. Original printed wrappers and backstrip bound in, fine - a beautiful set. Paul Bourget (1852-1935) was a novelist and critic of penetrating psychological analysis. His novels, which describe the life of the leisured classes, almost always deal with a dilemma of conscience and/or some sociological problem. The moralizing tone especially evident in his later writings may be attributed to his growing Roman Catholic and Royalist sympathies. Perhaps because of this tone, Bourget's criticism is often now valued more highly than his fiction. (Inventory #: 7741)
$750.00 add to cart or Buy Direct from
Priscilla Juvelis
Share this item