Sketch of the Life of Linda Gilbert, With Statistical Reports and Engraving of Herself 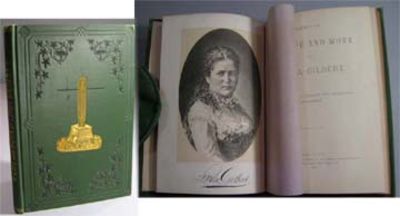 by Gilbert, Linda
New York: Printed at the Industrial School of the Hebrew Orphan Asylum, 1876. First Edition. 8vo; 99, (1)pp; fine tinted portrait of Gilbert lithographed by Bien; original dark green cloth with elaborate floral decoration in blind, lettered in gold and with gold vignette on front of ball and chain, handcuffs, flogging post; with neat, small private library label on front pastedown endpaper, a fine copy. Linda Gilbert (1847-1895), philanthropist and prison welfare worker, was active first in Chicago then in New York City. She wrote this book as an appeal to the public for funds with which to carry on her work. It consists of case records as well as material on industry in prisons, justice and injustice, penitentiary reform, repeat offenders, pickpockets, prison libraries, effect of kind words, charity, modern jails, the mission of women, etc. As a young woman she established in Chicago the first county jail library. "She then set herself to providing libraries for as many jails as possible and to assisting prisoners in whatever way she could, soon becoming known as the 'Prisoner's Friend'". In 1873 she went to New York City, renewing these efforts by forming the Gilbert Library and Prisoner's Aid Fund. She visited prisons and devoted much attention, particularly, to the Ludlow Street Jail and The Tombs, as well as to women prisoners at Sing Sing. She pleaded for humane treatment of prisoners, and an employment bureau for them. NAW II, pp 31-32. DAB. (Inventory #: 8297)
$250.00 add to cart or Buy Direct from
Priscilla Juvelis
Share this item