The Story of a Pioneer 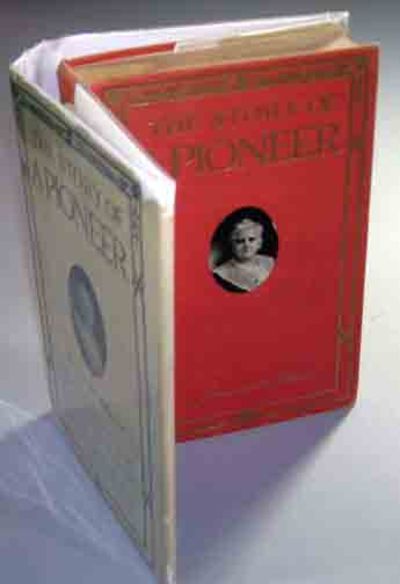 by Shaw, Anna Howard
New York and London: Harper and Brothers, 1915. First Edition in original dust jacket. 8vo; 338pp; orange gilt-stamped cloth with printed photograph image of Shaw on front panel, teg, in original dust jacket that is buff paper printed in dark brown with photographic image of Shaw and a facsimile of her signature above blurb; book shows some rubbing to bottom tips and bottom of spine, spine a bit dimmed, somewhat shaken, jacket chipped at top of spine with loss of top of "S" and "T", split about 3" along front hinge, triangular chip 1 1/2 x 1/2" at bottom of front cover, top and bottom edges rumpled and chipped, about very good. Anna Howard Shaw (1847-1919) became the first woman ordained by the Methodist Protestant church (1880) after graduating Boston University Divinity School in 1878, the only woman in her class. Considering what could be called (at best) a trying childhood (often abandoned by her father with an invalid mother in a crude log cabin nine miles from the nearest settlement), her accomplishments are the more remarkable. Enrolling in Boston University Medical School in 1883 (age 36), she graduated with the degree of M.D. in 1886. She later came to the conclusion that there was "but one solution for women - the removal of the stigma of disfranchisement." (p. 151) Friendship with Susan B. Anthony led to her appointment as national lecturer of the newly united National American Woman Suffrage Association (NAWSA). In 1892, she became Vice President under Anthony's Presidency and President herself in 1904. While the NAWSA failed to make significant headway during her Presidency, she continued to speak and act on the side of women's rights. She died of pneumonia shortly after the suffrage amendment had passed both houses of Congress and was on its way to becoming law. NAW III, pp. 274-7. Women's Writing, pp. 860-2. Krichmar 5012. Timelines, pp. 39, 46, 206, 261. (Inventory #: 7067)
$275.00 add to cart or Buy Direct from
Priscilla Juvelis
Share this item