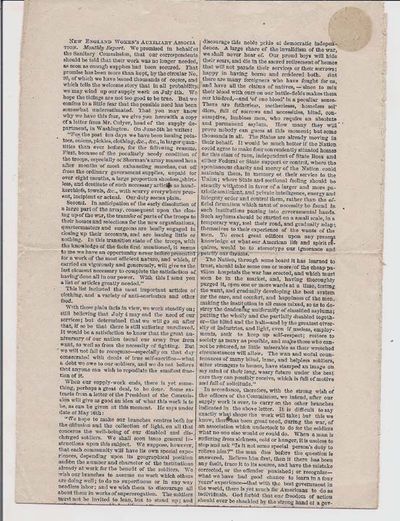 by [Sanitary Commission] May, Abby W.
[Boston, Ma], 1865. Issued by Abby W. May as Chairman of the Executive Committee. Circular, 6" x 16-5/8", printed on newsprint, one side. Folded once lengthwise and then into fourths; 1/2" paper residue from small round price sticker (removed) at upper right corner (not affecting text), generally very good. Abby [Abigail] W. May (1829-1888), a prime mover in boston reform circles for more than 30 years, was active in charitable work, freedman's aid and women's suffrage. She joined the New England Women's Auxiliary Association of the United States Sanitary Commission in December 1861, serving first as Secretary. From February 1862 through March 1866 May acted as chairman of the executive committee. "In his capacity she received and disbursed money and supplies estimated at nearly a million dollars in value." [NAW] Issued after the end of hostilities, the circular looks to July 4th as the wind up of the work of the Auxiliary. May quotes at length, however, from a letter from the head of supply department in Washington describing the needy condition of the troops, end of war or no. In fact, anticipating the speedy release of soldiers, army quartermasters "are busily engaged in closing up their accounts, and are issuing little or nothing." May states simply that "It would be a satisfaction to know that the great anniversary of our nation found our army free from want, as well as from the necessity of fighting." The Commission and its New England auxiliary will continue as long as their is need. May continues by discussing he needs of disabled and discharged soldiers and of the widows and orphans. They require public support and May sees the Commission's work evolving into assistance for all those severely effected. She concludes the circular with an accounting of the monies and goods handled by the committee from May 12-June 12. NAW II, pp. 513-515. (Inventory #: 6547)
$135.00 add to cart or Buy Direct from
Priscilla Juvelis
Share this item