Lovejoy. Excerpts from a Memoir. A Commentary and Etchings by Bruce Chandler with an Epilogue by Anthony Lewis 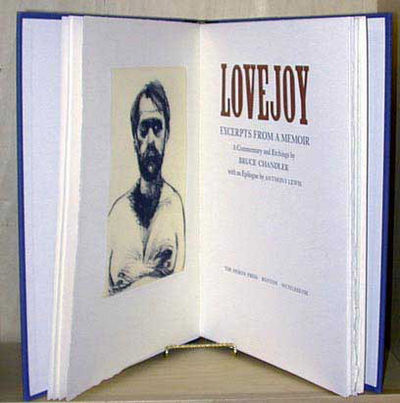 by Heron Press. Chandler, Bruce
Boston: The Heron Press, 1988. First Edition, one of 115 copies each signed by the author / artist, Bruce Chandler, and Anthony Lewis. Page size: 15-1/2 inches x 11-1/4 inches . Illustrated with eight etchings, most of them drypoints, some with aquatint and lift ground, one double page, by Chandler, who also editioned them. The text, set in Monotype Janson, was printed by Dan Keleher. Woodtype of the period was used for the title page. Bound by Harcourt Bindery: 1/4 blue morocco and blue linen over boards, in tan linen clamshell box; the deluxe copy loose in 1/2 morocco clamshell box, fine. The Reverend Elijah P. Lovejoy, called by John Quincy Adams "the first American Martyr to the Freedom of the Press & the Freedom of the Slave," was a native of Maine and graduate of Colby College. He settled in St. Louis, MO in 1827 where he founded a school modeled on the New England classical school. He then bought an interest in the St. Louis Times, becoming Editor and Publisher. In 1832 after undergoing a religious conversion he went to Princeton Theological Seminary. In 1833, with a license to preach the gospel as a Presbyterian minister, he returned to St. Louis to start a new religious newspaper, the St. Louis Observer. He immediately started writing against slavery and was attacked by a local mob, his press being thrown into the Mississippi. this happened three more times. Each time Lovejoy resumed his publishing crusade. However, on November 7, 1837, the mob would not be denied. Lovejoy was shot and his press destroyed. Lovejoy has been a subject of interest to scholars of the Abolition Movement since that time, resulting in several works including Senator Paul Simon's LOVEJOY, MARTYR TO FREEDOM. Bruce Chandler has written the text, using excerpts from the family MEMOIR, published in 1838, Lovejoy's own abolitionist titles, his letters to his family, as well as more recent biographies. The telling of Lovejoy's bravery and commitment in both pictures and works, reprinting Lovejoy's own articles and family letters, is beautifully done. The etchings are dark and menacing; the text firm and clear. This is a thoughtfully produced hommage to freedom of the press -- an important story retold and interpreted by one of this country's fine book artists. (Inventory #: 2789)
$950.00 add to cart or Buy Direct from
Priscilla Juvelis
Share this item