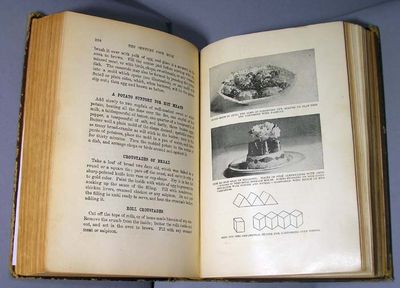 by Ronald, Mary
New York: The Century Co, 1911. First Edition thus, expanded from the first edition of 1895. 8vo; 635pp; (incl. index) + 58 photographic and illustrative plates; brown publisher's cloth over boards, stamped in dark brown and forest green on both boards and spine with decorative cooking-related ephemera, "Time Table" printed in brown ink on front paste down, and "Weights and Measures" chart printed in brown ink on rear paste-down. Spine and edges very worn, text block yellowed and revealing moderate usage and occasional staining, owner signature in ink on front flyleaf: "Helene R. Griswold, March 29th, 1912," and some recipes written (two different hands) on front and back blanks and half-title. Newspaper clipping from mid-century pasted on front blanks: "How to Lower the Cost of Living: Mayor's Committee Tells what to Eat in Place of Meat"; acid staining on adjacent leaf, good. Mentioned only in the preface is the inclusion of "a number of receipts of New England dishes" by Susan Coolidge, the pen name of Sarah Chauncey Woolsey, noted children's author (the "Katy" series) and poet. With extensive sections on the etiquette of dinner-giving, the method for training a "green cook" (Ronald's attention to economy is often belied by the assumption that every household have a hired cook), the proper setting of the table, and "A Homily on Cooking," CENTURY COOK BOOK offers much more than mere recipes. At moments it reads like a conduct manual, and at others like an advice column for young brides; but throughout it gives a fascinating glimpse into the material culture, economy, and culinary habits of the turn-of-the-century American bourgeoisie. With hundreds of recipes to choose from, the modern cook will find plenty to pilfer from here, as well as much to run from screaming. As one reviewer wryly notes, corsets are not such a surprise after all: something had to be done to compensate for cakes made with--God's truth--one cup of butter, two cups of sugar, and four eggs (see page 471, which also has a pound cake recipe featuring the use of no less than ten eggs). There is much here to savor and appreciate--if somewhat less to eat. (Inventory #: 8337)
$150.00 add to cart or Buy Direct from
Priscilla Juvelis
Share this item