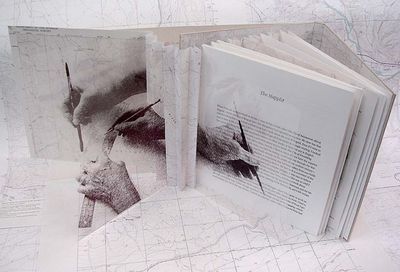 by Pacific Editions. Hobson, Charles. Lopez, Barry
San Francisco, CA: Pacific Editions, 2005. First Edition thus, one of 48 copies, all on BFK Rives paper, signed by the author, Barry Lopez, and the artist / designer / publisher, Charles Hobson, in pencil and numbered by Hobson. Page size: 11 inches x 12 inches. Bound: with original USGS maps for the concertina binding, which, when opened, creates its own vista of mountains and valleys representing the maps that figure so prominently in the Lopez story, covers made of paper over boards, paper reproducing a 1911 map of Bogotá from the collection of the Library of Congress, publisher's slipcase of wood-grained paper over boards with brass-toned metal label holder attached to spine of box holding white paper label with title and author in black, all suggesting a map cabinet which plays a pivotal role in Lopez's story, further housed in tan corrugated paper board slipcase, slipcase and board covers made by John DeMerrit with the assistance of Kris Langan, new. The book opens with images of hands emulating gestures of a map maker at work reproduced as digital pigment prints on transparent film. The book also contains landscape images and an image of pencils from the writing desk of Barry Lopez printed as digital pigment prints from monotypes with pastel all created by Charles Hobson. The text has been printed letterpress by Les Ferriss in Garamond Narrow type. The book and images were created by Charles Hobson who assembled the book with the assistance of Alice Shaw. Barry Lopez's THE MAPPIST was originally published in 2000 in LIGHT ACTION IN THE CARIBBEAN. It is a multi-layered story perfectly embodied by Charles Hobson's book. Themes of hidden identities searched out and deciphered, hidden intentions coded in seemingly disparate actions, and the tantalizing possibilities of bringing order to a chaotic history are beautifully served by the combination of maps that are the subject of the story and, literally, hold the story together. The story itself is certainly one of the wittiest "legends" ever devised for its surrounding map. The reader is challenged with images thrown up by the author and artist: bits of map interspersing text, bits of map as foredge and gutter outside edge on any turn of the page, a phrase full of possibilities "he was a patriot" and suggestions in the form of queries: was Lewis Mumford a populist? When "The Mappist" gives the narrator a copy of his very rare book, THE CITY OF GERANIUMS, the reader is doubly seduced with this act of generosity (or is it instinct to preserve one's values) for the words are preceded and followed by a page of transparent film with the image of a map being passed from one hand to another. Turning the film page, the reader is confronted with the act being completed and the hand off accomplished. The narrator finishes his tale with a ride down a very dark gravel road, using the sound of the tires on the crushed stone as his "map." We are left wondering where will we find our maps - and will we be able to read them - or remember what we've read. Pacific Editions' THE MAPPIST will certainly help in this ongoing quest. (Inventory #: 9671)
$2100.00 add to cart or Buy Direct from
Priscilla Juvelis
Share this item