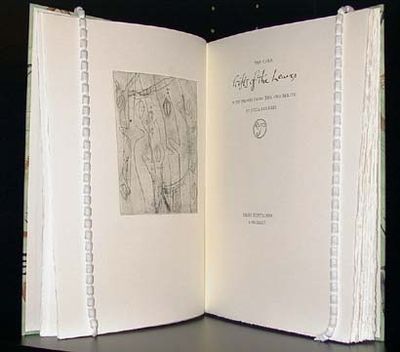 by Golgonooza Letter Foundry. Carr, Dan
Ashuelot: Trois Fontaines [Golgonooza Letter Foundry], 1997. One of 80 regular copies from a total issue of 109 copies (80 numbered copies, 26 lettered copies, and 3 Artist's Proof copies), all on Arches paper, each signed and numbered or lettered by the author and type designer, punch cutter and printer, Dan Carr, and the artist and binder, Julia Ferrari. The 80 numbered copies have one etching and three duotone reproductions by Julia Ferrari, who has also written an "Artist Afterword" and designed the beautiful shaped colophon. As an example of contemporary book arts, this may well be unique, I can think of no other book of contemporary verse where the author / printer has designed and cut a unique type face for his book. Page size: 12-1/2 inches x 9-1/4 inches; 72pp. Bound by Julia Ferrari: handmade green pastepaper with black and brown overall abstract design, corresponding to the frontispiece etching, title in black on white label on spine. All the numbered edition copies correspond to one season, depending on the frontispiece etching. That is, there are four variations of the book in the numbered edition with the different pastepapers used in the binding keyed to the original frontispiece etching. Dan Carr created a type face called Regulus after the star rising through the trees when the first alphabet was completed for his verse. In the Preface he states he views "the poems are collected as an alphabet." The collections of verse, he goes on, are about "transformation found in the seasons of a year...my poems revealed a kind of stations of the soul, the cycle of the seasons of frost and sun." The theme of transformation that occurs in nature and that constancy of change are perfectly interpreted in words and image. (Inventory #: 9550)
$1200.00 add to cart or Buy Direct from
Priscilla Juvelis
Share this item