The Walk with God. Edited by her Daughter Laura E. Richards 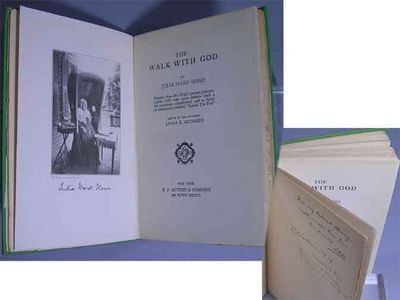 by Howe, Julia Ward
New York: E.P. Dutton & Co, 1919. First Edition, Inscribed by Laura Richards to Daisy Chanler on the ffe, "For my beloved Daisy. / with much love from / her devoted / LER / Christmas. 1919" . 8vo; original green gilt-stamped cloth; light blue dust jacket printed in dark blue; book with a bit of light rubbing to corners and spine ends, gilt on spine a bit dimmed, with small (1/4" stain to the left of the first two words of title on spine, two small white dots on back hinge; jacket a bit soiled, rubbed, and chipped at extremities, about very good. A nice association copy of a scarce Howe title. This volume was published for the centenary of the birth of Julia Ward Howe and the editor has noted that although her mother's journals were not intended for publication, she has decided to publish them as they "may conceivably help and comfort other seekers of the Way...". Much of the poetry included herein is previously unpublished as is an essay on immortality, "Beyond the Veil." Julia Ward Howe (1819-1910), author of The Battle Hymn of the Republic, poet, abolitionist and suffrage leader, lay preacher, peace worker and primary mover in the club movement, was the first woman elected to the American Academy of Arts and Letters (1808), a precedent not repeated until 1930. Laura Elizabeth Richards (1850-1943) author, sister of Maud Howe Elliott, spent most of her life in Gardner, Maine, and she dedicated much of her life to the welfare of that community. She wrote a number of successful children's books. In 1915 she was awarded the Pulitzer Prize (with her sister) for their biography of their mother. NAW III, pp. 148-150. Margaret "Daisy" Terry Chanler (1862-1952), author, was the half-sister of novelist Marion Crawford and an intimate friend of Edith Wharton. (Inventory #: 8921)
$600.00 add to cart or Buy Direct from
Priscilla Juvelis
Share this item