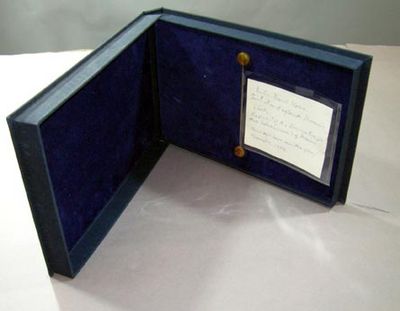 by Howe, Julia Ward
[NP], 1904. Card size: 4-3/8 x 4-5/8". The quote reads "Julia Ward Howe / Pres' New England Women's / Club / Ex-pres' of the Association for / the Advancement of Women. / Mine eyes have seen the glory" and is all in Howe's hand. On the verso is the autograph of "Charles W. Eliot / Harvard University / 1904". Julia Ward Howe has summed up her life's work citing contributions to women's rights first. Housed in custom-made blue linen clamshell box, lined with blue velvet, indent for quotation housed in plastic sleeve that can be flipped to view either side without removing, although plastic is open at top edge for removal as well, red morocco label on spine stamped in gold gilt, fine. Julia Ward Howe (1819-1910) was catapulted to instant fame in February 1862 when the Atlantic Monthly published the "Battle Hymn of the Republic." Mrs. Howe's activities increased after 1868 in the burgeoning postwar woman's movement. She served as President of the Massachusetts Woman Suffrage Association, the New England Woman Suffrage Association and was a leader in the national organization was a suffrage leader and one of the founders of the New England Women's Club and the New England Woman Suffrage Association. She founded the weekly "Woman's Journal" in 1870. She was the first woman elected to the American Academy of Arts and Letters (1908), a precedent not repeated until 1930. In this autograph note written at age 85, just six years before her death, Mrs. Howe seems to be summing up her life. What is particularly fascinating is the order - one assumes listed in importance - of her not inconsiderable achievements. She first lists "President New England Women's Club (which she founded in 1868, assumed presidency in 1871, holding this office almost continuously until her death). The second achievement she lists is "Ex-pres of the Association for the Advancement of Women" (which she helped found in 1873 with the pioneer New York woman's club, Sorosis). The last achievement Mrs. Howe lists is "Mine eyes have seen the glory-" which is, of course, the opening line of "Battle Hymn of the Republic." It is interesting that this is in "third place" in her catalogue of accomplishments. Charles W. Eliot (1834-1926) was the President of Harvard and the most influential leader in the educational activities of the country during his tenure there (1869-1909). We can find no mention of a meeting between Howe and Eliot in 1904. Her biographers note that Howe almost never refused a request for a verse or sentiment and in 1904, Charles Eliot was fund-raising for teacher's salaries at Harvard. In any event, this is a wonderful piece, confirming that Julia Ward Howe, author of one of America's most famous poems, felt her real contributions were to women's rights. Richards and Elliott, Julia Ward Howe, V. II, pp. 355-356. DAB, pp. 71-78. NAW pp.225-229. (Inventory #: 7269)
$2500.00 add to cart or Buy Direct from
Priscilla Juvelis
Share this item