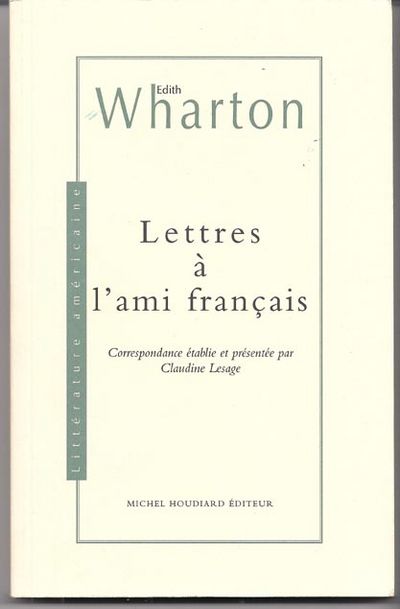 by Wharton, Edith
Paris: Michel Houdiard Editeur, 2001. First edition. 8vo; 158pp; buff printed wrappers, new. Printed here for the first time are over 150 letters from Edith Wharton to her intimate French friend, Leon Belugou, detailing their friendship of over 25 years. Wharton wrote these letters in French and they are faithfully reproduced here. The originals of this correspondence are in Yale's Beinecke Library. Leon Belugou would come to play a crucial role in Edith Wharton's expatriate life. Over the next 25 years they developed an intimate friendship; he was, perhaps, her closest French friend. Leon Belugou (1865-1934) French scholar was introduced into the best "salons" in Paris; in fact, he was private tutor for noble wealthy families, including that of the Duke de Gramont. Although not actually part of the highest French society, he was quite close to them and often acted as a sort of non-clerical Abbe Mugnier when their money or love affairs became compromising. He was known for his tact and ability at handling embarrassing situations. As such, he was invaluable when Wharton decided to conquer the Faubourg Saint-Germain. Later, when her marriage to Teddy was ending, Edith approached her dear friend, Leon Belugou for assistance; he complied, finding her an attorney to handle the divorce and acting as official translator for the letters Teddy and his family wrote that were introduced into the legal proceedings. It is clear that Belugou served as the model for the character in THE AGE OF INNOCENCE, the secretary of Count and Countess Olenska. Although he remained nameless, he is referred to and cited as assisting the Countess in obtaining her divorce later in her life - much as the author had. (Inventory #: 9024)
$30.00 add to cart or Buy Direct from
Priscilla Juvelis
Share this item