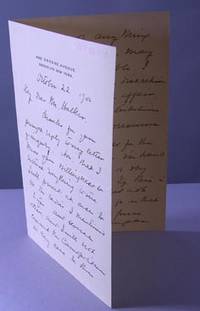 by Sangster, Margaret E[lizabeth Munson]
New York: October 22, 1900. Letter. 4 1/2 x 7"; 2pp; written on cream colored personal stationary, folded vertically to form two pages, one crease horizontally for mailing, stamped date at the top of the first page reading "OCT 23 1900," very good. Margaret Sangster (1838-1912) was a magazine editor and author who supplied verse, articles and stories to a number of publications. She edited children's and family pages for Hearth and Home and the Christian Intelligencer and was appointed editor of Harper's Bazaar in 1889. She regarded herself as a "Christian leader of women" and was interested in the welfare of girls. Originally opposed to woman suffrage, she changed her views about 1910 because she saw "the helplessness of woman as a competitor in the labor market when she has no voice in the making of the laws affecting her." In this letter, she discusses arrangements for the January 1901 issue of Cosmopolitan. NAW III, pp. 235. Feminist Guide, p. 946. (Inventory #: 8533)
$125.00 add to cart or Buy Direct from
Priscilla Juvelis
Share this item