On the correlation of physical forces: Being the substance of a course of Lectures delivered in the London Institution in the year 1843 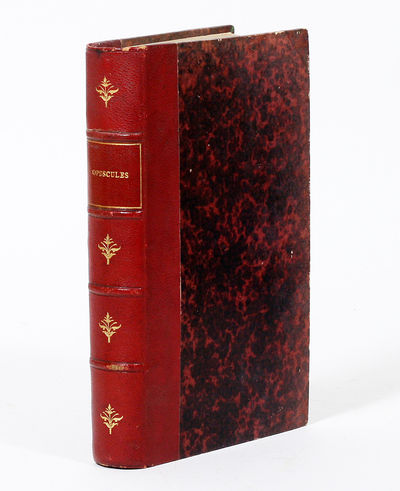 by GROVE, WILLIAM ROBERT
London: Charles Skipper. 1st Edition. Hardcover. Very Good. FIRST EDITION, FIRST STATE of Grove's proposal of the conservation of energy: "the earliest general account of the principle." In 1842, "Sir W.R. Grove, English judge and man of science, known by his invention of a voltaic cell, explained in a lecture the idea of the interrelation of natural powers, an elaborated it in a book published in 1846 under the title of The Correlation of Physical Forces. This and the independent study in 1847 by the great German physiologist, physicist and matematician H.L.F. von Helmholtz, Ueber die Erhaltung der Kraft, contained the earliest general account of the principle now known as the 'conservation of energy'" (Dampier, A History of Science). "In this essay... Grove argued that all physical forces such as electricity, heat, light, magnetism, and so forth, should be regarded as being correlated, or mutually inter-related. Any one of these forces could be used to produce any of the others such that no particular force could be said to be the particular cause of another. Under particular circumstances any one of them might be the cause and any of the others the effect. In many ways, the essay was an argument against traditional notions of causality. Grove advanced a large number of experimental examples from the various branches of the physical sciences to substantiate his claims. He suggested that the main task of the natural philosopher was to demonstrate how this principle of correlation operated universally" (Oxford DNB). First state: Regarded as the offprint or "unpublished" state, with "by order of the managers of the London Institution, at the request of the proprietors" on title. Contained in a sammelband with a large collection of physics and engineering texts about electricity, electro-magnetism, and telegraphy (22 papers total) in various languages, with a very interesting booklet on the use of the first telegraphic cable between Europe and United-States. Grove's work is complete, with title, Preface, and 52 pages of text. London: Charles Skpper, 1846. Octavo, nineteenth-century half-red morocco over marbled boards. With cropped inscription (from Grove?) on title. A little scuffing to binding, otherwise fine. RARE. (Inventory #: 1435)
$2,800.00 add to cart or Buy Direct from
Manhattan Rare Book Company
Share this item