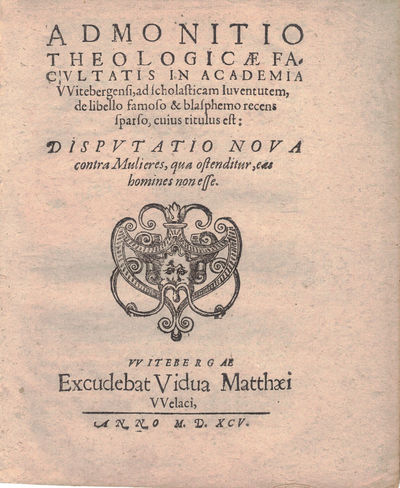 by (ACIDALIYS, Valens,?)
Wittenberg: Widow of Mattheus Welack, 1595. First Edition. 4to, (6) leaves, with typographical ornament on the title-page and at the end.VD 16 W-3700; Universal STC no. 609252. BOUND WITH: [GEDIK, Simon?] RUFUTATIO OPPOSITA ... autoris thesibus, quibus humanam naturam foeminei sexus impugnat, in qua praecipuae calumniate huius mendacis spiritus refutantur, quae sit illius intentio ostenditur, et studiosi pietatis omnesq(ue) Christiani monentur, ut sibi caveant a tam Diabolico scripto. Concinnata a Collegio studij Theologici Lipsensis. Leipzig: Abraham Lemberg, 1575. 4to, (6) leaves with a typographical ornament on the title-page. Unbound, lightly browned and a light damp stain on the lower margin. VD 16, L-1044; Universal STC no. 690207. The first item is the first edition (one of two issues of the same year: our copy is the one set in italic, probably set first as the copy in Roman type shows signs of haste in the pulling of the sheets). The anonymous tract DISPUTATIO NOVA CONTRA MULIERES qua probatur eas Homines non esse. (A new argument against women, in which it is demonstrated that they are not human beings) was first published in 1595. It rapidly grew notorious and was republished in the 17th and 18th centuries.The work was attributed to the philogist Valens Acidalius (1567-1595) who handed the MSS to printer Heinrich Osthausen who issued it. Acidalius denied the authorship. (see M. P. Fleischer, "Are Women Human Beings? - the Debate of 1595 between Valens Acidalus and Simon Geddicus" in The Sixteenth Century Journal", 12/2/1981, pp. 107-120. ) By selectively quoting scripture, the author attempted to prove that women do not have souls. "The first printed refutation appeared almost immediately. The theological faculty of the University of Wittenberg, the acknowledged center of orthodox Lutheran teaching in the last part of the sixteenth century, decided to distribute to its students a pamphlet ("An Admonition to students by the theological faculty) warning them of the dangers inherrent in reading the Disputatio. Although the author is not named, the pamphlet is signed at the end by "the Dean, Chairman and Professors of the theological faculty of the University of Wittenberg, January 12, 1595... The author may have been Aegidius Hunnius the Elder (1550-1603), a senior professor at Wittenberg. At some time during 1595 Hunnius was dean of the faculty ... A committed and orthodox Lutheran, Hunnius unhesitatingly attacked the view of other Christian thinkers... expressing strong support for attitudes and beliefs which the Disputatio appears to attack. He had no doubt that women are equal of men in relation to baptism and salvation"[C. Hart, Treatise on the Question De Women Have Souls and Are they Human Beings? Disputatio nova? with translation, Commentary and Appendices, Lewiston, NY, 2004, pp. 34-35]. The second title was issued just a week after the first (on January 19,1595) as the faculty of the University of Leipzig had already written a pamphlet condemning the Disputatio. The title promises "that the pamphlet will refute the calumnies of the Disputatio, reveal its intentions and offer a warning to all studious Christians that they should be wary of such a diabolical piece of writing." These and other details suggest that this was written by Gedik (cf Hart, p. 38) who later issued a longer refutation, "Defensio sexus muliebris" (1595). "Within its limited scope the Refutatio ranges widely. Although it attends in detail to some propositions of the Disputatio, it is more concerned to stress general matters of Christian orthodoxy and, in particular, to repudiate the views of the Anabaptists and other non-Lutheran sects"[Hart, p. 39]. (Inventory #: 54420)
$4,400.00 add to cart or Buy Direct from
Second Life Books
Share this item