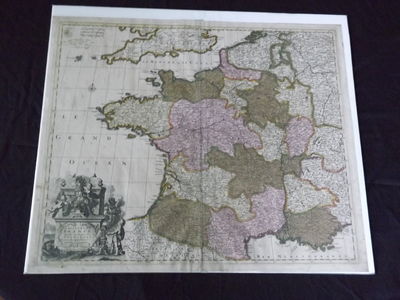 by Sanson, Nicholas.
Copper engraved map, double page, (24" x 20"), hand colored, and large uncolored title cartouches. Some minor soiling, a little wear along centerfold, with old verso repair, normal aging; very good. Samson (1600-1667) is often referred to as the father of French cartography. Louis XIII was impressed with his work and appointed him "Geographe Ordinaire du Roi". During his career Sanson would produce about 300 maps, and his major atlas "Cartes Generales de Toutes les Parties du Monde" would represent an important part of his body of work. While two of his sons continued publication of his maps after his death, Pieter Schenk (1655-1718), an important publisher and engraver in his own right, published this map. The map is attractively colored and gives a detailed view of the provinces of France. The map is also decorated with a large title cartouche. Bagrow p. 185. map hist website. (Inventory #: 104160)
$450.00 add to cart Available from
Nicholas D. Riccio, Rare Books
Share this item
Nicholas D. Riccio Rare Books & Prints
Offered by