A Voyage towards the South Pole, and Round the World. Performed in His Majesty's Ships the Resolution and Adventure, In the years 1772, 1773, 1774, and 1775. In which is included Captain Furneaux's Narrative of his Proceedings in the Adventure during the Separation of the Ships ... Second Edition 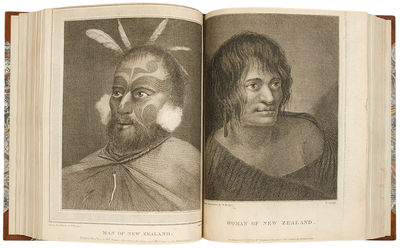 by COOK, Capt. James (1728-1779)
London: W. Strahan and T. Cadell, 1777. 2 volumes, 4to. (11 x 8 5/8 inches). Engraved portrait of Cook by J. Basire after Wm. Hodges, 63 engraved plates, maps and charts, 1 folding letterpress table. Expertly bound to style in half eighteenth century russia over period marbled paper covered boards, spine with raised bands in six compartments, red and black morocco lettering pieces in the second and fourth, the others with a repeat decoration in gilt Second edition of Cook's second voyage describing his attempt to circumnavigate the globe as far south as possible in search for a southern continent. "Cook earned his place in history by opening up the Pacific to western civilization and by the foundation of British Australia. The world was given for the first time an essentially complete knowledge of the Pacific Ocean and Australia, and Cook proved once and for all that there was no great southern continent, as had always been believed. He also suggested the existence of antarctic land in the southern ice ring, a fact which was not proved until the explorations of the nineteenth century" (Printing and the Mind of Man p.135). "The success of Cook's first voyage led the Admiralty to send him on a second expedition, described in the present work, which was to circumnavigate the globe as far south as possible in search of any southern continents ... the men of this expedition became the first to cross the Antarctic Circle. Further visits were made to New Zealand, and on two great sweeps Cook made an astonishing series of discoveries and rediscoveries including Easter Island, the Marquesas, Tahiti and the Society Islands, Niue, the Tonga Islands, the New Hebrides, New Caledonia, Norfolk Island, and a number of smaller islands. Rounding Cape Horn, on the last part of the voyage, Cook discovered and charted South Georgia, after which he called at Cape Town, St. Helena and Ascension, and the Azores ... This voyage produced a vast amount of information concerning the Pacific peoples and islands, proved the value of the chronometer as an aid to finding longitude, and improved techniques for preventing scurvy" (Hill p.123) "This, the official account of the second voyage, was written by Cook himself ... In a letter, dated June 22nd, 1776, to his friend Commodore William Wilson, Cook writes: - "The Journal of my late Voyage will be published in the course of the next winter, and I am to have the sole advantage of the sale. It will want those flourishes which Dr. Hawkesworth gave the other, but it will be illustrated and ornamented with about sixty copper plates, which, I am of the opinion, will exceed every thing that has been done in a work of this kind; ... As to the Journal, it must speak for itself. I can only say that it is my own narrative ..."' (Holmes pp.35-36). Beddie 1217; cf. Hill (2004) 358; cf. Holmes 24; cf. Printing and the Mind of Man 223; Rosove 77.A2; cf. Sabin 16245. (Inventory #: 21449)
$7,000.00 add to cart or Buy Direct from
Donald A. Heald Rare Books
Share this item
Donald A. Heald Rare Books
Offered by