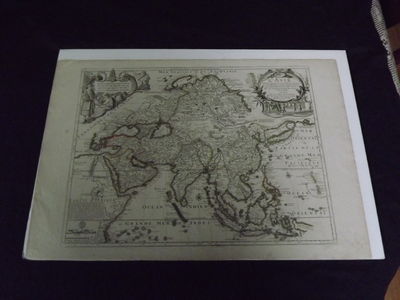 by De Fer, Nicholas
Engraved double page map, 28" x 20", wide margins, hand colored in outline, two uncolored pictorial cartouches. Expert and nearly invisible repairs along centerfold, normal aging; about near fine. Impression is bright and clean. Nicholas De Fer (1646-1720) was a highly respected and prolific French cartographer whose maps were valued for their decorative appeal. Around 1690 he was made the geographer to the Dauphin, and published his first atlas. He would become geographer to other high-ranking individuals in French and Spanish society. The present map is detailed and attractive map of Asia, with a cartouche showing Chinese at the upper left, and Indians in the upper right. The map covers a lot of territory showing Arabia and the Persian Empire in the West, and Japan in the east, but goes as far south as the Isle of Borneo and Java. Part of Eastern Europe is also visible. Library missouri website. (Inventory #: biblio10)
$1,500.00 add to cart Available from
Nicholas D. Riccio, Rare Books
Share this item
Nicholas D. Riccio Rare Books & Prints
Offered by