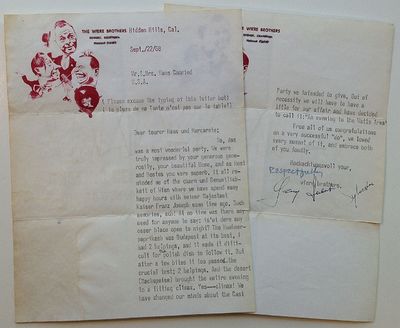 by THE WIERE BROTHERS: Harry, Herbert & Sylvester
Hidden Hills, CA, 1968. unbound. 2 pages, 11 x 8.5 inches, Hidden Hills, California, September 22, 1968. Written to American actor and voice-over comedian Hans Conried, in part: "...das was a most wonderful party...It all reminded me of the charm und Gemuetlichkeit of Wien where we have spend (sic) many happy hours with seiner Majestaet Kaiser Franz Joseph some time ago. Such memories, ach! At no time was there any need to say: is'nt dere any osser blace open to night?" Undoubtedly this letter was written by Herbert Wiere, but is genuinely signed by all three brothers. Damp-staining on both pages with occasional fraying at the borders; good condition. Vaudeville performers who occasionally appeared in films and on radio and television. In 1962 they had their own TV show which was directed by the legendary Jules White, who had previously worked with The Three Stooges, Buster Keaton, and Andy Clyde. (Inventory #: 255971)
$200.00 add to cart or Buy Direct from
Argosy Book Store
Share this item