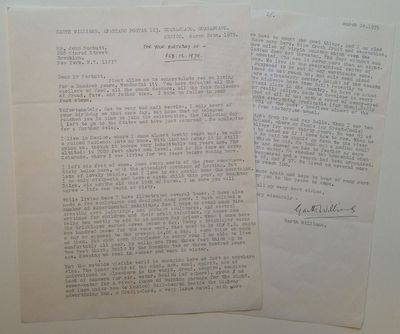 by WILLIAMS, Garth (1912 - 1996)
Guanajuato, Mexico, 1979. unbound. 2 pages, 11 x 8.5 inches, Guanajuato, Mexico, February 12, 1979. Written to his friend John Norbutt on his 100th birthday, in small part: "First allow me to congratulate you on living for a hundred years. Wonderful!!! You have defeated all the spoilers of food, all the quack doctors, all the fake followers of Freud, fate, and father time. I hope to follow in your foot steps...I live in Mexico, where I came almost 20 years ago, to make a ruined Hacienda into my home...The altitude is 7000 feet above sea level, and is the same as Aspen, Colorado, where I was living for ten years before coming here. I left six feet of snow. Snow every month of the year sometimes. Sixty below zero, with the attendant problems of heating. But lots of lovely people, and I love to ski gently over the mountains. I am only sixty-six and have a sixth child this year, my daughter Dilys six months old...While living here I have illustrated several books...I have painted a number of experimental paintings. Now I hope to spend much time creating more paintings, and perhaps sculptures, and several writings for children and their adult inferiors...When I came here the bricklayer earned seven pesos a day. Today a bricklayer earns one hundred pesos for the same work. That used to be 60 U.S. cents a day as opposed to the present $4.00 a day...The outside visible world is changing here as fast as anywhere else. The inner worlds of the mind, ego, soul, spirit, are as undeveloped as elsewhere in the world. Greed, avarice, complete lack of concern for air, water, health (of others), gives us sewer-water for a river, fumes of burning garbage for the night, and (now quite new to Mexico) bill-boards beside the highway advertising Rum, a Credit-Card, a very large hotel, with more threatned (sic). But we have to count the good things, and I am glad to say we still have many here..." Natural folds but still in fine condition. American artist who came to prominence in the post-war era as an illustrator of children's books including "Charlotte's Web," "Stuart Little," and "Bedtime for Francis." (Inventory #: 255986)
$300.00 add to cart or Buy Direct from
Argosy Book Store
Share this item

Cabool, The Punjab and Beloochistan

London : London Printing and Publishing Company , 1851
(click for more details about Cabool, The Punjab and Beloochistan)
View all from this seller>