Original Journals of the Lewis and Clark Expedition 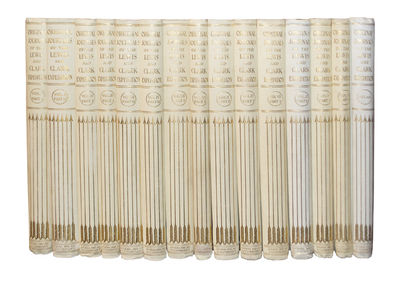 by LEWIS, Meriwether
Edition De Luxe of the "Original Journals of the Lewis and Clark Expedition," Limited to 50 Copies LEWIS, Meriwether. CLARK, William. Original Journals of the Lewis and Clark Expedition. 1804-1806. Printed from the original manuscripts...Together with manuscript material of Lewis and Clark from other sources... Edited, with Introduction, Notes, and Index, by Reuben Gold Thwaites. New York: Dodd, Mead & Company, 1904. First edition, first printing. Edition De Luxe, limited to 50 copies, of which this is number 34 printed on Imperial Japan Paper with all volumes marked so on the colophons. Large quarto. The Edition De Luxe contains 33 of the plates (including 7 frontispieces) in two states; black and white and hand tinted in color, all unique to this edition. Fifteen folio volumes including atlas. Original tan buckram, decoratively stamped in gilt. Front covers inset with color portraits of Lewis and Clark. Frontispieces in all volumes with tissue guards. Complete with all 54 maps, as listed. This Edition De Luxe precedes the trade edition of the same date. A fine, bright set. A landmark of Lewis and Clark scholarship. Printing for the first time many major primary documents which were not in the Biddle edition; including the Floyd and Whitehouse journals, material from the Clark-Voorhis papers as well as facsimile manuscripts, maps and portraits and other material. Despite the importance of Lewis and Clark's transcontinental expedition, the first edition of their findings did not appear until some eight years after their journey, in 1814. However, no definitive edition of the journals was published until this one, the most accurate, and according to Howes, "the most elaborate work on this expedition." The text includes letters by Lewis and Clark, the journals of expedition members Sergeant Charles Floyd and Private Joseph Whitehouse, and an annotated bibliography compiled by Victor H. Paltsits bibliography of the Lewis and Clark expedition is a valuable contribution as well. "This edition is notable for its thorough introduction...and a detailed account of the original journals and their various editions...This edition is also the first to present many ancillary materials for the first time. Perhaps most striking are the 53 facsimiles of original maps, mostly by Clark, covering every step of the route. In its maps and numerous illustrations the Thwaites is an outstanding source of visual materials relating to the expedition." Howes 320. Literature of the Lewis and Clark Expedition, 5d.1. HBS 67338. $22,500 (Inventory #: 67338)
$22,500.00 add to cart Available from
Heritage Book Shop
Share this item

Chicago : The Reilly & Britton Co. , 1910
(click for more details about Emerald City of Oz)
View all from this seller>