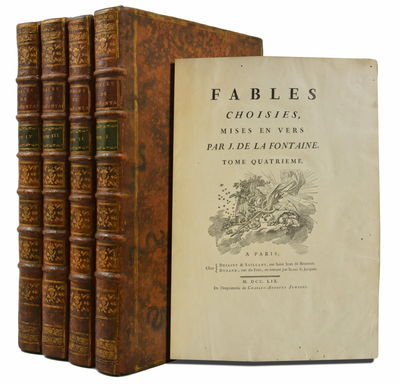 by La Fontaine, Jean de
Paris: Chez Desaint & Saillant [et] Durand, De l'Imprimerie de Charles-Antoine Jombert, 1759. First edition. A large paper copy with leaves measuring 465 x 330 mm (18 3/8 x 13 inches). Four volumes handsomely bound in contemporary French mottled calf. Red and green morocco spine labels with rich gilt detailing, marbled end-papers and all edges marbled. Discrete repairs to the spine ends without rebacking. Internal contents are generally in excellent condition although with the occasional spot of foxing and with a few worm pinholes running through the blank margins. Front inner hinge of Volume IV cracked but holding and slight age-toning to text leaves in that volume. Collating: [iv], xxx, xviii, 124; [iv], ii, 135, [1 blank]; [iv], iv, 146; [iv], ii, 188 [2 blanks]. Complete with the engraved frontis, the extra engraved portrait of Oudry (found only in some copies) and 275 other engraved plates after Jean-Baptiste Oudry by Cochin, Tardieu, Prevost, Chedel, Lempereur, and others, as well as numerous woodcut title vignettes, headpieces and tailpieces. The first plate for Fable CLXXII, "Le Singe et le Leopard" (facing p. 112 in Vol. III), is in the second state with the words "Le Leopard" on the banner. Bookplate of "John Drummond" in all four volumes and a second bookplate with the name illegible.

After he became director of the Beauvais tapestry factory, Jean-Baptiste Oudry (1685-1755) began to amuse himself sketching subjects from La Fontaine's Fables. He made a total of 276 sketches between 1729 and 1735. The story of how they became the illustrations of the Fables of 1755 - 1759 is told in the "Avertissement de l'editeur" in Volume I by the publisher Montenault, who had bought the sketches. Ourdry's subjects being landscapes and animals, which he had drawn freely for his own enjoyment, Cochin undertook the responsibility of turning these freehand drawings into finished prints. Although Oudry's skill at portraying animals and his interpretation of La Fontaine's humor can hardly be surpassed, Cochin's sure and experienced hand did much to improve the original designs, particularly the figures. He redrew them, correcting the figures and background and supplying precise lines for the engravers.

La Fontaine's towering classic of French literature. "They are like a basket of strawberries. You begin by selecting the largest and best, but, little by little, you eat first one, then another, till at last the basket is empty," wrote the famed wit Madame de Sevigne. La Fontaine did not start writing full time until he was over thirty, but he would become one of the major figures in the French canon. His fables are his most well known and well regarded work -- he collected and adapted close to 240 of them. In early editions, La Fontaine drew chiefly from classical western sources, like Aesop and Phaedrus, but as the fables grew in popularity and he added more to them, he would draw from Eastern and Oriental stories as well as Continental ones. The Fables were first released on 1668, with the final 12th book published in 1694. "La Fontaine became the greatest lyric poet of his time" (New York Review of Books). (Inventory #: 1260)
$29,500.00 add to cart or Buy Direct from
Whitmore Rare Books
Share this item

Washington DC : McGill & Witherow , 1864
(click for more details about First Annual Report of the National Association for the Relief of Destitute Colored Women and Children)

Friendship Album of a Young Woman at the Georgetown Female Seminary

Scott County, Kentucky 1852
(click for more details about Friendship Album of a Young Woman at the Georgetown Female Seminary)
View all from this seller>