A Dwelling for Five Thousand Dollars 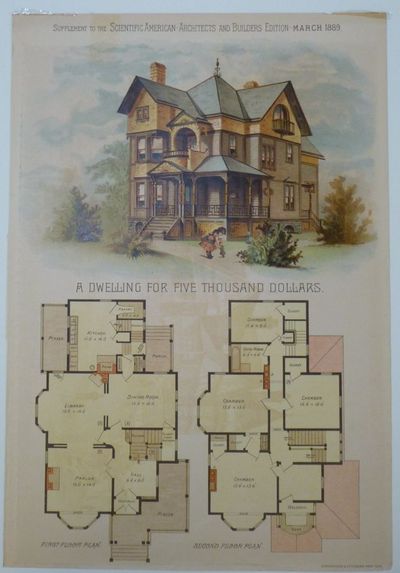 by SCIENTIFIC AMERICAN ARCHITECTS AND BUILDERS EDITION
Schumacher & Ettlinger, New York, 1889. View. Image measures 16 x 10". This sheet of architectural renderings appeared in the supplement to the Scientific American Architects and Builders Edition of March 1889. This page is one of a large variety of city, suburban, and rural homes, as well as cottages and other buildings, that the magazine documented in drawing and rendering. This particular house is a large family home, as indicated by the small girl playing with a doll outside. The floor plans below show both stories of the house, which includes four bedrooms, a parlor, a dining room, and a library. The details showcase elements common in Victorian-era homes, such as pantries and built-in benches and cabinets. The print is in good condition with some offsetting Narrow margins as issued but small repairs verso top margin. "Scientific American Architects and Buildings Edition" was first published in 1885 and later became known as the Building Monthly. The magazine was a precursor to "House and Garden," providing insight on Victorian architecture and design to its readers. This image is a lovely document of this period of American design and architecture. (Inventory #: 255484)
$250.00 add to cart or Buy Direct from
Argosy Book Store
Share this item