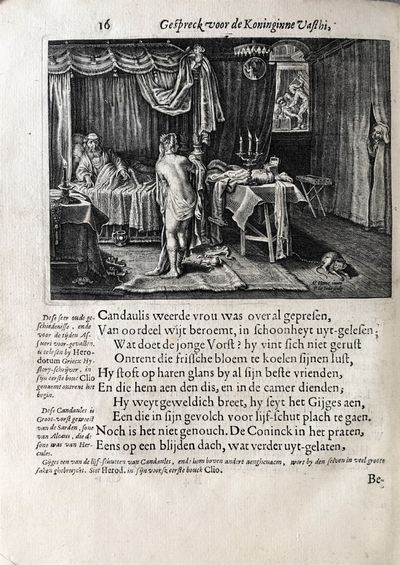 by VAN DE VENNE, Adriaen, artist; CATS, Jacob (1577-1660)
Middelburg: Jan van der Hellen for Jan Pieterss. van de Venne, 1622. 4to (233 x 176 mm).  [16], 60, [19], [1 blank] pp. Large emblematic publisher's mark on title-page, four half-page engraved illustrations, by Pieter de Jode (2), Pieter Serwouters, and Willem van der Passe after Adriaen van der Venne. Woodcut head- and tail-pieces and initials. Short marginal tear to title, light dampstaining to first and last leaves. Later parchment over pasteboards, ms. spine title. Provenance: Samuel Ashton Thompson Yates (1842-1903), bookplate dated 1894.  First Edition of Cats' retelling of the Biblical tale of Queen Vasthi, the wife of Ahasuerus, who refused her husband's summons to appear before his guests wearing the royal crown (and presumably nothing else), and who was duly punished. The first part of Cats' word-playing verse adaptation, whose title may be translated as The Theater of Manly Respectability, is a long speech in the Queen's defense and in defense of all women, followed by a speech against her and in favor of "Manly Respectability." The work concludes with the Judgment, which is that Vasthi should obey her husband, because women's subservience to men is a law of nature. A final poem titled "Aller Princessen, Spiegel, aller Vrovwen, Spoor," is illustrated with an engraving showing the humbled queen wearing a yoke around her neck. The parallels and differences between the Biblical Ahasuerus and Herodotus' tale of King Candaules (supplied in Latin and Dutch translations in an appendix), whose wife's rebellion was more successful, are fully exploited by Cats and by the illustrator, Cats' usual partner the painter and engraver Adriaen van de Venne (whose brother Jan published the edition).Van de Venne's engravings, notably the scene of Candaules' naked wife being surprised by Gyges, served as models for a number of Dutch painters. The Van de Venne brothers played a central role in the dissemination of Cats' poetry, and it is their joint production that makes the works come alive: "The complete works of Cats, together with Van de Venne's illustrations formed a sort of housebook of the Dutch people which remained popular for two centuries..." (Bol, p. 117).Following the privilege on the title verso is a letter from the publisher to all bailiffs, officials and readers ("Noodige Waersschouwinge..."), complaining of the many counterfeit editions of an earlier Cats work, the 1620 Self-stryt, and explaining how to tell them apart. A second edition (without the Noodige Waersschouwinge) appeared later in 1622, and several further editions followed. De Jonge van Ellemeet, Museum Catsianum, 97; Bol, Adriaen Pietersz. Van de Venne (1989), p. 118. (Inventory #: 2666)
$1,250.00 add to cart or Buy Direct from
Musinsky Rare Books
Share this item