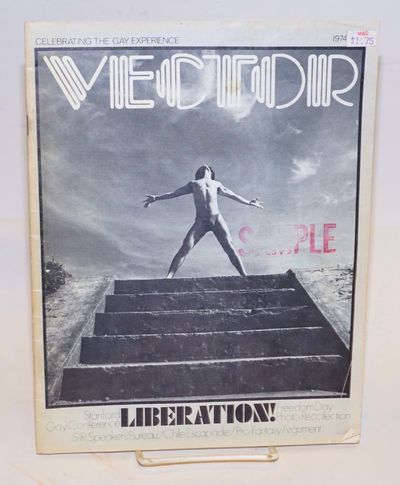 by Piro, Richard, editor, Frank Howell, J. Kerry kammer, Larry Kent, et al.
San Francisco: Society for Individual Rights, 1974. Magazine. 40p. including covers, 8.5x11 inches, illustrated with photos of nude young men, artwork and ads, stamped SAMPLE on cover otherwise a very good magazine in stapled pictorial wraps. Cover story on Stanford Gay Liberation Conference. Gay Freedom Day photos. S.I.R. was an extremely important homophile organization in the 1960s-70s and "Vector" was the main gay magazine for the Bay Area during those years. The magazine began life as a newsletter in 1964, merely several folded and or stapled sheets with news and calendars. The late Sixties found the magazine concentrating more on local and national news of interest to gay men.The final years saw the magazine turn more to a standard gay men's magazine with photos of young men from around the Bay Area. (Inventory #: 192974)
$25.00 add to cart or Buy Direct from Bolerium Books
Share this item

The Curse of Caste

An Historic Guide to Cambridge, compiled by members of the Hannah Winthrop chapter National Society, Daughters of the American Revolution

by Pilgrimage Committee [25 or so persons] of the Hannah Winthrop Chapter [D.A.R.]

Cambridge MA : [the D.A.R. chapter] , 1907
(click for more details about An Historic Guide to Cambridge, compiled by members of the Hannah Winthrop chapter National Society, Daughters of the American Revolution)
View all from this seller>