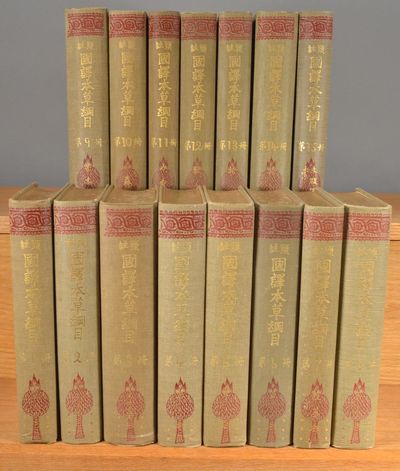 by [MATERIA MEDICA] Li Shizhen; translated by Makino
1929. [MATERIA MEDICA] Li Shizhen; translated by Makino Tomitaro, et al.. Tôchû KOKUYAKU HONSÔ KÔMOKU. Shunyodo, Tokyo, Showa 4 [1929] 15 volumes, bound Western-style in decorated cloth over boards, slipcases. The late 16th century Chinese materia medica, Honzo Komoku, was imported into Japan by the early 17th century. The first japanese edition appeared in 1637, the definitve enlarged Japanese edition in 1714, with native japanese plants added. The Edo era versions were printed in classical Chinese with diacritical marks (kanbun) to aid the Japanese reader. This set at hand was translated into modern pre-war Japanese and, as such, became the first version of the text useful to the general Japanese reading public. One of the most important guides to the medicinal uses of plants in East Asia. It should be noted that the binding decorations are quite lovely Deco-inspired floral designs, here still in excellent, clean condition. Complete. (Inventory #: 88051)
$650.00 add to cart Available from
Boston Book Company
Share this item