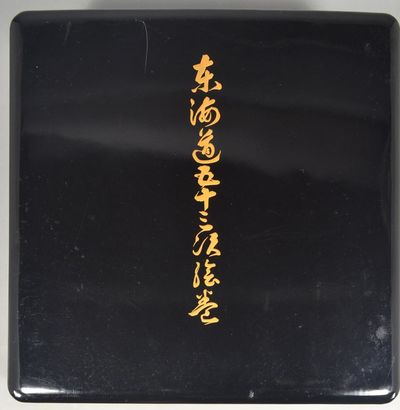 by [SKETCHTOUR GENRE] Ôtani Sonyû & Iguchi Kashû
1919. [SKETCHTOUR GENRE] Ôtani Sonyû & Iguchi Kashû, artists. TOKAIDÔ GOJÛSAN-TSUGI EMAKI Kyoto Taisho 11 [1922]. Eight handscrolls with woodcut coloring over collotype, complete. The scrolls have bone jiku with brocade covers and sumi over gold title labels. SCROLL ONE. Congratulatory inscriptions by Otani Kozui (then Abbot of Nishi Hoganji and Sonyû's older brother), Tomioka Tessai, dated 8th month of Taisho 8, "at the age of 88" and Zen artist Hashimoto Dokuzan, dated September 22, Taisho 8. The pictures of the stations of the old Tokaido alternate between Sonyû and Kashû. Most station names are well known, but there are alternate local names, and in some cases other place names are itemized parenthetically. Station One: Nihonbashi by Sonyû. A night scene, with department stores, pedestrians, streetcars and, prominently, a black motor car. Station Two: Shinagawa by Kashû.An early morning panorama, lights on in village houses, fishing boats still moored, a steam dredge, distant steamships. Station Three: Kawasaki by Sonyu. Tourists and locals stroll along the shop-lined country road. Station Four: Kanagawa by Kashu. In the foreground, loading docks and warehouses. On the distant shore, factories, a quiet village. A passengerliner and freighters of all descriptions and sizes crowd the harbor. Station Five: Hodogaya by Sonyû. A birdseye view of the hills and farm fields in the distance, a quite village of thatched-roof dwellings. Station Six: Totsuka by Kashû. A village flanking the Tokaido, a farmer walking a cow and calf. Station Seven: Fujisawa by Sonyû. Beneath a crescent moon, a man with a lantern walks away from a dark temple. Station Eight: Hiratsuka by Kashû. Birdseye view of a long wooden bridge over the Sagami River in late summer rain. SCROLL TWO: Station Nine: Oiso by Sonyu. The Izu peninsula across the. (Inventory #: 87695)
$18,500.00 add to cart Available from
Boston Book Company
Share this item