Now We Are Six. With Decorations by Ernest Shepard. 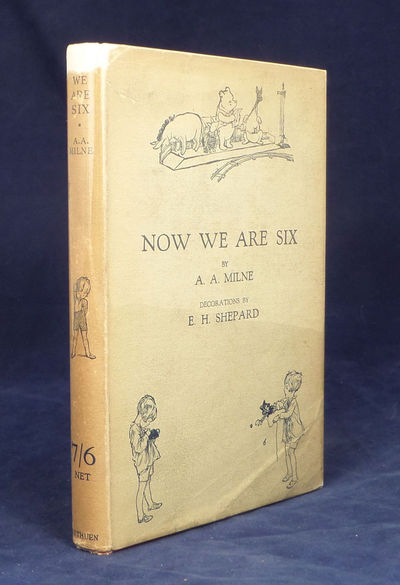 by Milne, A.A.
Sm. London: Methuen & Co., 1927. Sm. 8vo, x, 103 pp. Original red cloth, titled, ruled, and pictorially stamped in gilt, top edge gilt, pictorial endpapers bubbled here and there and with a crease. In original dust jacket, lightly soiled and with some material lost from the headcap and inner front flap. § First edition. The third of Milne's books about Christopher Robin and his friends and the second volume of poetry, including the priceless "Sneezles," "Binker," and "Us Two," ("Wherever I am, there's always Pooh, / There's always Pooh and Me..."). It followed closely on the heels of When We Were Very Young and Winnie-the-Pooh and exceeded the sales of both. Pooh features in several poems and Shepard’s illustrations are notable for including many illustrations of Pooh, Piglet, and friends, even surrounding poems on other subjects. (Inventory #: 106391)
$1,750.00 add to cart or Buy Direct from
John Windle, Bookseller
Share this item

Climbs and Ski Runs. Mountaineering and Ski-ing in the Alps, Great Britain and Corsica.

The Ballad of the Sad Cafe: The Novels and Stories of Carson McCullers.

Boston : Houghton Mifflin
(click for more details about The Ballad of the Sad Cafe: The Novels and Stories of Carson McCullers.)
View all from this seller>