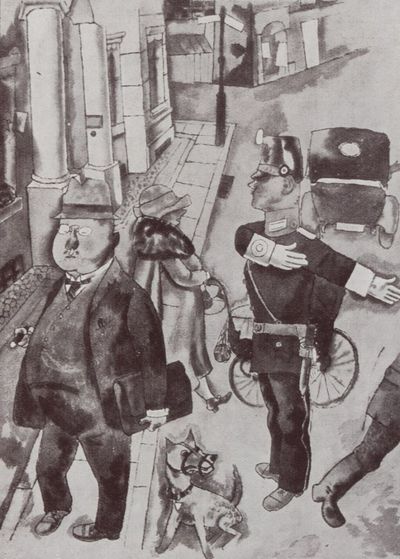 by Flechtheim, Alfred; Carl Einstein, Marc Neven, Max Herrmann, and Florent Fels (Text by); Gottfried Benn (Poem by)
Berlin: Das Kunstarchiv Verlag, 1926. First edition. Softcover. g+. Quarto. 36pp. Original printed wrappers. Catalog published on the occasion of an exhibition of paintings and drawings by George Grosz, held during the Spring of 1926 in Berlin, at the Galerie Alfred Flechtheim.* This catalog features 24 duo-tone and b/w photographic reproductions. Includes a poem by Gottfried Benn, and four essay on the artist and his work by Carl Einstein, Marc Neven, Max Herrmann, and Florent Fels. Some age-wear and moderate soiling on wrappers. Upper corners bumped, thus slightly affecting pages throughout. Text in German, gothic script, with one of the four essays in French. Wrappers in overall good- to good, interior in good+ to very good condition. * Alfred Flechtheim (1878-1937) was a German art dealer, art collector, journalist and publisher. Flechtheim appeared in the art world shortly after 1900, with a collection of paintings by Vincent van Gogh and Paul Cézanne; French Avant garde early works of Pablo Picasso, Georges Braque and André Derain; paintings of Wassily Kandinsky, Maurice de Vlaminck, Alexej von Jawlensky, Gabriele Münter, and the Rhein Expressionists Heinrich Campendonk, August Macke, Heinrich Nauen (de), and Paul Adolf Seehaus (de). Flechtheim opened his first gallery in Düsseldorf in 1913, followed by galleries in Berlin, Frankfurt, Cologne, and Vienna. Flechtheim served in the German Army during World War I, but not at the front. His art business collapsed during the war but he re-opened in Düsseldorf in 1919. In 1921 he founded "Der Querschnitt" (the Cross Section), a cultural magazine. Legendary, glamorous parties in Flechtheim's gallery overflowed with the glitterati of the new Berlin: movie stars, titans of finance, prizefighters and artists of every stripe. As Hitler rose to power in the late 1920s and early 1930s, Flechtheim became a bête noire because of the art he espoused and championed. In 1933, Sturmabteilung men broke up an auction of Flechtheim's paintings. The Nazis aryanized Flechtheim's gallery, as they would many other Jewish businesses, and turned it over to Flechtheim's business manager, Alex Vömel. After the war, former party member Vömel said he didn't even remember who Flechtheim was. The Nazis seized and sold off Flechtheim's private collection, as well as the contents of his gallery. Emigration and Death Six months after the Nazis came to power in 1933, Flechtheim, penniless, fled to Paris, and tried to find work with his former business partner, Daniel-Henry Kahnweiler. Flechtheim subsequently organized exhibits in London of the paintings of exiled German artists. In London, Flechtheim slipped on a patch of ice, was taken to a hospital, punctured his leg on a rusty nail in his hospital bed, developed septicemia leading to amputation of his leg, and died. (Inventory #: 39022)
$350.00 add to cart or Buy Direct from
Eric Chaim Kline Bookseller
Share this item